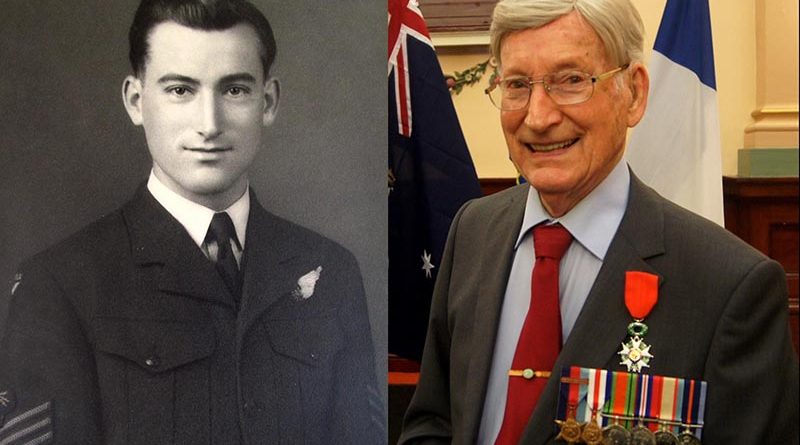 He was an active member of Mitcham Branch of the Air Force Association, and on 15 May 2015 proudly received a certificate acknowledging 60 years of loyal membership of the South Australian Division.

Doug was committed to the Anzac March in Adelaide and was a regular attendee at Air Force Association commemorative events.

After extensive training through the Empire Air Training Scheme, on 9 March 1945, Doug was posted as a wireless/telegraph operator with No 149 (East India) Squadron RAF at Methwold, County of Norfolk (Lancaster Mk II & III bombers).

He participated in five operational missions over Germany in 1945, and then a series of humanitarian-aid missions in support of Operation Manna (food supply drops to the western Netherlands) and bringing former POWs back to England in Operation Exodus.

At the Bomber Command memorial service in Adelaide on Sunday 4 June 2017, Doug met an Air Force Cadet who was the grandson of a mate he had gone through training with, who had also served in 149 Squadron. It turned out that Flying Officer Mark Fry and Doug had both enlisted in the RAAF in Adelaide on the same day – 12 September 1942. Read the CONTACT story of this amazing ‘reunion’ here.

At the Bomber Command service at Torrens Parade Ground in Adelaide on Saturday 2 June 2018, Doug again met with Cadets who had formed a Guard of Honour and other important roles on the day – story here.

The mother of two former AAFC Leading Cadets said, “He was an amazing gentleman to talk with and both [of my sons] remember Mr Doug Leak very well. We were all saddened to hear of his passing. To the family of Mr Doug Leak we hope you all find comfort and peace during this most difficult time – Memory Eternal”.

As a young lad, I remember ‘Uncle Doug’ showing me his war medals. In 2008 I returned to Adelaide after an Army posting in the Philippines. After 25 years away, which included ‘warlike service’ in East Timor, Doug and I had something significant in common – we both had the Returned from Active Service Badge, although I think Doug did significantly more to earn his. However, Doug had lost his badge and his discharge certificate in a house fire many years before and I was able to arrange official replacements for him. It was at that time he politely suggested that, because we were now both veterans, I could stop calling him ‘Uncle Doug’.

Doug certainly served with courage, and fulfilled his various duties with honour, integrity and good humour. In particular, he inspired me to emulate his sense of duty and humility. He is greatly missed. 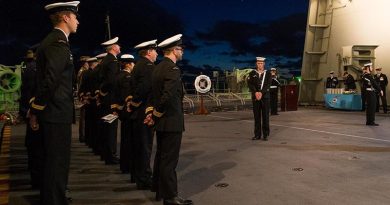 75th Anniversary of the loss of HMAS Canberra (I)