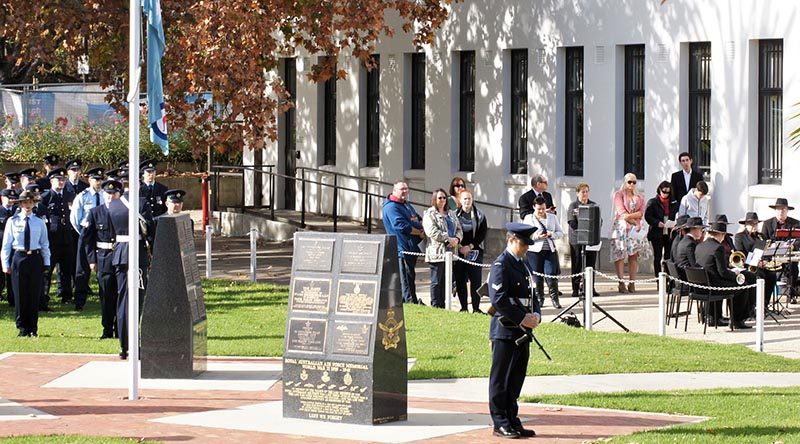 462 Squadron and the AAFC remember

On Saturday 2 June, the Senior RAAF Officer SA and the President of the RAAF Association (SA Division) jointly hosted a Bomber Command Commemoration Service at Torrens Parade Ground in Adelaide.

CAPTION: The Ensign Orderly from No 6 Wing, AAFC in position in front of the contingent from No 462 Squadron, RAAF, at a Bomber Command Commemoration Service at Torrens Parade Ground in Adelaide. Photo by Flying Officer (AAFC) Paul Rosenzweig.

As the official custodian of the Adelaide Air Force Memorials, No 6 Wing, Australian Air Force Cadets had a Guard of Honour in attendance.

Cadets also assisted as door openers for VIP guests and assisted with wreaths and floral tributes.

One cadet gave the reading and another was Ensign Orderly.

No 462 Squadron, RAAF (re-formed in April 2005) honoured its association with the wartime 462 Squadron of Bomber Command by providing the Catafalque Party and a Guard of Honour.

This wartime connection is also maintained by No 460 Squadron, RAAF which was re-formed in 2010.

Both squadrons are now part of the Air Warfare Centre at RAAF Edinburgh.

Some 10,000 Australian airmen of the RAAF served with Bomber Command. Of these, 3486 were killed in action, representing about 20% of Australia’s combat deaths during World War 2. Many served in the eight Australian squadrons, but many more served as individuals in RAF squadrons.

Governor of South Australia Hieu Van Le attended in his capacity as Honorary Air Commodore of No 24 (City of Adelaide) Squadron, RAAF.

Among them was former Warrant Officer Doug Leak, who in 2016 was made a Knight of the French Legion of Honour in recognition of his contribution to the liberation of France in 1945.

Doug had applied for RAAF aircrew entry the day after the attack on Pearl Harbour. But the rush of volunteers at that time might have saved his life. His enlistment was deferred, and he was ordered to attend preparatory training two nights a week (unpaid), so he didn’t join up until 12 September 1942.

Doug worked his way through Initial Training School, Wireless & Air Gunner’s School and Bombing & Air Gunnery School, and gained promotion to Sergeant. He ultimately served with No 149 (East India) Squadron at Mettwold from 9 March 1945 as a Flight Sergeant (promoted to Warrant Officer on 14 April 1945). He flew missions as a Wireless Operator / Air Gunner (WAG) late in the war, in the mid-upper turret of Lancaster long-range heavy bombers.

He participated in five operational bombing sorties as part of Operation ‘Pointblank’ (the Allied Combined Bomber Offensive against Germany). In the commemoration address in Adelaide, guests heard that for aircrew on their first operational tour the chances of survival were one-in-two.

From 1 May 1945, Doug participated in six supply drop missions in The Netherlands (Operation ‘Manna’). Then, after the German surrender, the squadron dropped supplies to former POWs and ferried many ex-POWs back to England from the continent (Operation ‘Exodus’).

Flying Officer (AAFC) Paul Rosenzweig, 6 Wing Public Affairs & Communication Officer said, “While our Air Force Cadets joined with RAAF members to honour the fallen, they also had the opportunity to spend time with one of South Australia’s living legends, their cadet service helping to bridge the generations”. 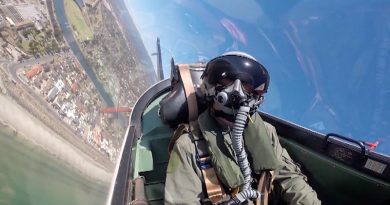 Cadets get a flight in a PC-9 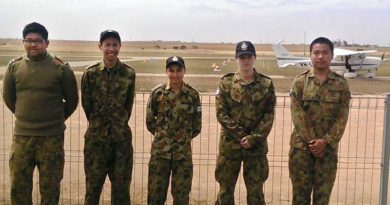 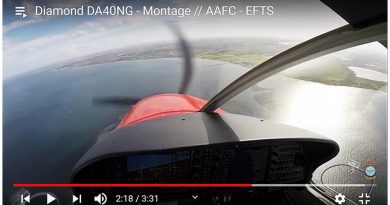 One thought on “TRIBUTE TO BOMBER COMMAND – Part 2”