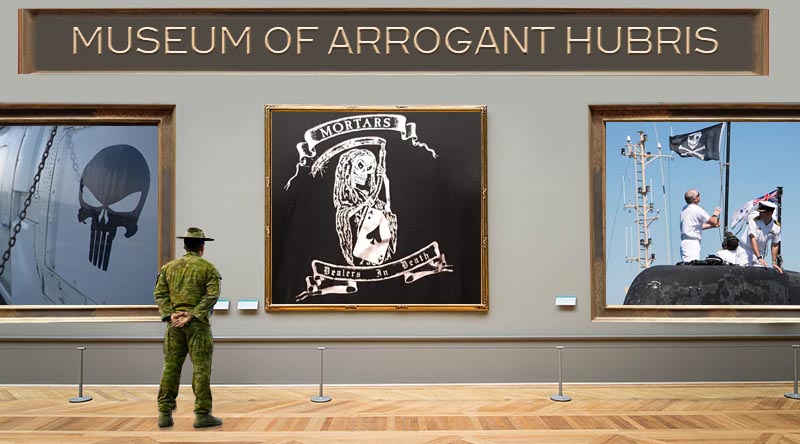 Welcome to the Museum of Arrogant Hubris.

Most of the images and designs in this collection were worn proudly as morale-boosting emblems on shoulder patches or PT shirts in informal settings.

They were mainly only sanctioned and/or tolerated as informal, good-natured, internal representations of unit or even sub-unit camaraderie – otherwise known as esprit de corps.

But, these are all now banned in the Australian Defence Force – especially Army – yet still remain as fond memories – and treasured ‘illegal contraband’ – for many serving and ex-serving Australian military. 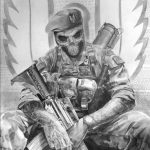 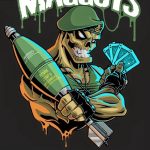 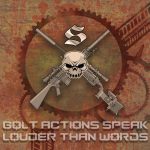 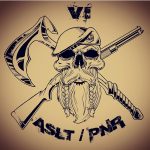 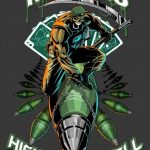 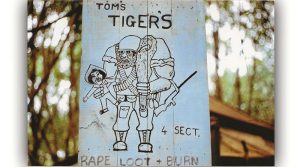 Dear Sir,
Would this sign be classed as Arrogant Hubris? It was put up outside of my tent in Vietnam in 1970, painted by one of my section.

A most worthy entry – thank you Tom. And thank you for your honourable service – Ed. 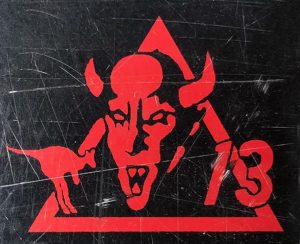 This from most likely 1st Armoured Regiment,  A Squadron, 3 Troop, from some time ago. 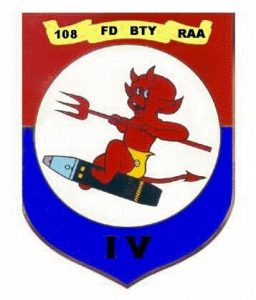 I hope it doesn’t inflame anyone’s passions and cause them to go mental (or is that insensitive too?). 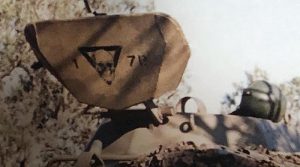 This photo was taken in the ’90s with WA’s ‘A’ Squadron, 10th Light Horse Regiment, where I served before going to ARA.

Traditions start somewhere. Look at The Royal Lancers (Queen Elizabeth’s Own) – “The Death or Glory Boys”. Look at their hat badge, CDF. The Queen understands and endorses it – tradition. 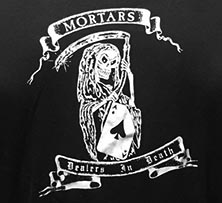 This image is from a Mortar Platoon PT t-shirt, which was specifically singled out by now CDF General Angus Campbell when, as Chief of Army, he banned ‘death’ symbology/iconography.

See related poem by Spent Cartridge, written in homage to the ‘Dealers in Death’. 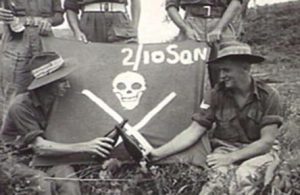 Corporals K.E. Wills and  C.T. Crawley ‘cross bottles’ in front of the skull-and-crossbones flag of the 2/6 Cavalry Commando Regiment, a tradition on every beer-issue day – on this occasion, at Karawop, New Guinea, 18 September 1945.

In the background were Sergeant J.H. Simpson, WO2 M.J. Hoder and Corporal O.A. Pomoroy. 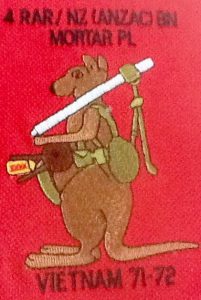 Above is a picture I drew in 1971, erected at the front entrance of the 4RAR/NZ(Anzac) Battalion Mortar Platoon compound at Nui Dat.
In later years the image was used on a platoon t-shirt, which us who are still getting together at various reunions wear to this day.
The image shows an Australian mortar-platoon soldier, depicted as a kangaroo, carrying a NZ mortar-platoon soldier depicted as a kiwi with a can of XXXX, in her pouch – plus the mortar barrel, tripod, baseplate and sights.
Because we were an Anzac mortar crew, I had to do a painting that would not upset either the Aussies or the Kiwis – hence, I designed it with a three-fold effect…
1.  it shows the Australian soldier carrying the Kiwi through the Vietnam War;
2. it shows the New Zealand soldier as smart, because he is getting a free ride, making the Aussie carry the load; and,
3. the can of beer is the peacemaker to be shared between the two nations, in this together. We help each other, we care and respect each other, because we are the 4RAR/New Zealand(Anzac) Battalion Mortar Platoon.
I hope this is suitable for display in the Museum of Arrogant Hubris. 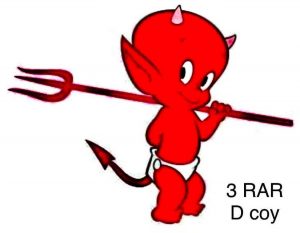 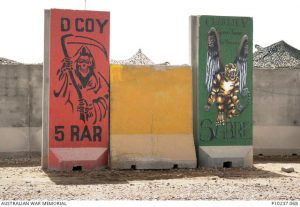 One of a series of photographs taken by Mike Cecil, Head of Military Heraldry and Technology, as part of The Australian War Memorial’s Curators in the Field program.

Mike travelled to Iraq in May 2008 to record the early stages of withdrawal of the Overwatch Battle Group (West) (OBG-W). 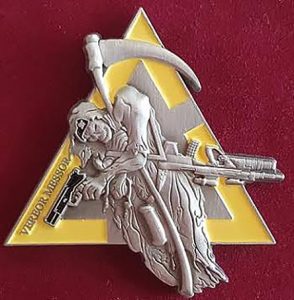 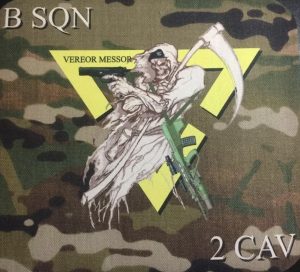 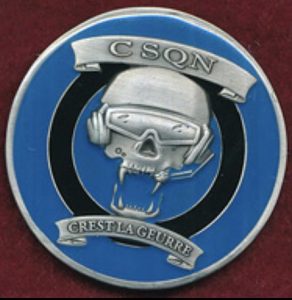 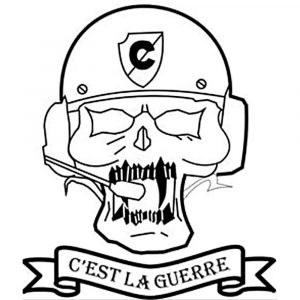 B and C Squadrons, 2nd Cavalry Regiment [note – the C Squadron motto on the blue badge should read C’est La Guerre – this is war] 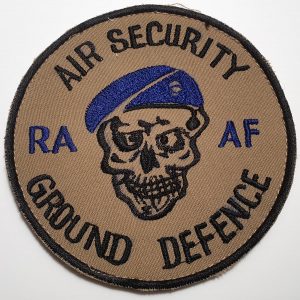 Please accept this contribution in the spirit of arrogant hubris.

On my rotation doing Air Security Operations in MEAO in 2005, we had these made as unofficial morale patches.

The team was made up from Regular and Reservist Airfield Defence Guards assigned to TG 633 in support of C130 operations. 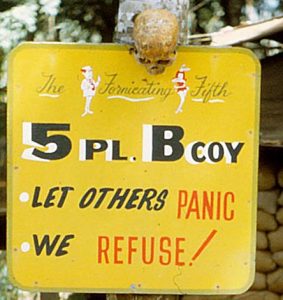 Never mind you auld ‘skull symbology’ – “The Fornicating Fifth” had a real skull to go with their placard. 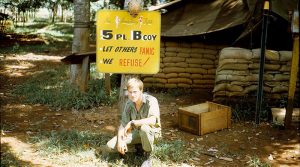 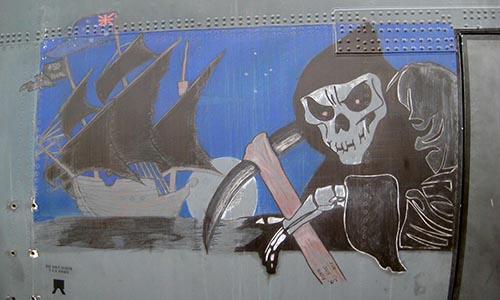 This is a picture of some nose art on one of our C-130J Hercules, taken in 2010 in the MEAO.
I believe ‘Dirty’ took the photo.
You may want to add it to your collection.
Cheers,
Bushy

The use of what could be termed ‘death’ symbology/iconography: for example the pirate Skull and Crossbones (maritime outlaws and murders), the Phantom or Punisher symbols (vigilantes), Spartans (extreme militarism) or the Grim Reaper (Bringer of Death) – implicitly encourage the inculcation of an arrogant hubris.
Commanders must take immediate action to remove such symbology/iconography from all formal and informal use within the Army.

One wonders how long the Jolly Roger will last in the Royal Australian Navy, now that General Campbell is Chief of Defence Force.

The tradition of flying the Jolly Roger on submarines began in 1914 in response to a comment that submariners should be ‘hung like pirates’ because of their role in sinking civilian ships – and an earlier complaint by First Sea Lord Admiral Sir Arthur Wilson that submarines were “underhanded, unfair, and damned un-English”.

Lieutenant Commander Max Horton, captain of submarine HMS E9 initiated what is now the unofficial practice/tradition of flying the flag after returning from successful patrols.

This exhibit – and this museum – were suggested by Spent Cartridge