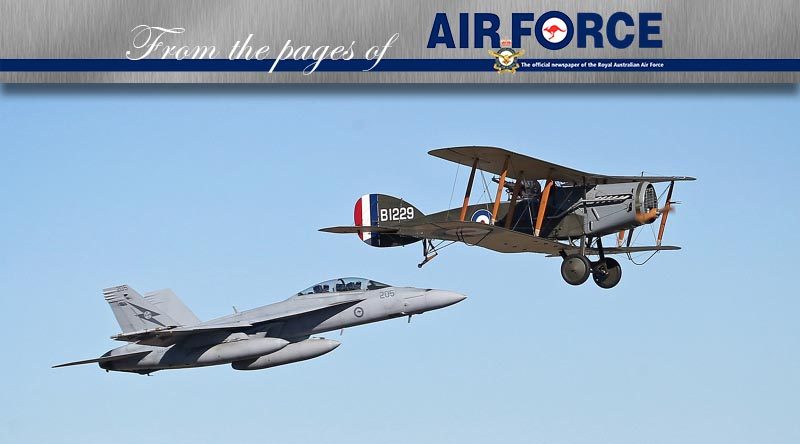 “THE Bristol is a living symbol of the generations of men and women upon whose shoulders we currently stand.”

Caption: A formation flight with No 1 Squadron (1SQN) F/A-18F Super Hornets and a Bristol F2B Fighter (aircraft flown by 1SQN in World War 1) commemorates the SQN’s Centenary and marked 1SQN’s first operational sorties on 12 June 1916. The Bristol F2B Fighter was provided by TAVAS (WWI vintage aircraft society) and flown by Jack McDonald. The Bristol was painted in WWI-era 1SQN colours and had the tail number B1229. The tail number was flown by Ross McPherson Smith who achieved 10 of his 11 victories in this aircraft.Photo by David White

That was how CO No. 1 Squadron WGCDR Steve described a rare sortie involving a vintage WWI Bristol fighter and an F/A-18F Super Hornet to celebrate his squadron’s centenary.

“We are honoured to host the Bristol here at RAAF Amberley and to have it take part in 1SQN’s Centenary celebrations,” WGCDR Steve said.

“It really means a lot to the men and women of the squadron to see such a significant chapter of squadron history rejoin us in the skies.”

The vintage Bristol F.2B, which was one of the squadron’s earliest aircraft, was ably flown by 85-year-old Jack McDonald, a pilot for No. 77 Squadron during the Korean War.

During the sortie, F/A-18F Super Hornets flew in formation with the Bristol F.2B fighter over RAAF Amberley on June 8.

The event specifically commemorated the squadron’s first operations, on June 12, 1916, in the Sinai Campaign in WWI.

The F/A-18F aircrew were excited to take up the rare opportunity of flying alongside the vintage aircraft.

However, the flight did pose significant challenges – most notably a major airspeed difference between the two aircraft.

F/A-18F pilot FLTLT Guy said it was a great opportunity to fly alongside an aircraft that his squadron was flying 100 years ago.

“It is incredible to think that 1SQN personnel were flying wooden aircraft with open cockpits. The flight gave me some perspective as to what it may have been like for 1SQN airmen during WWI,” he said.

The Australian Vintage Aviation Society (TAVAS), which is based at Caboolture, Queensland, generously provided the Bristol.

It was specially painted in 1SQN markings for the occasion. The tail number – B1229 – was that of the aircraft flown by CAPT Ross Macpherson Smith during WWI. In this tail, he recorded 10 of his 11 victories.

“The Super Hornet of its time”, the Bristol was supplied to 1SQN to replace its obsolete fleet and it was flown by the squadron during the latter stages of WWI.

The aircraft came at the urgent request of the then commanding officer, MAJ Richard Williams, otherwise known as the “father of the RAAF”.

It was used in various roles during 1917 and 1918, including offensive patrols, bombing and reconnaissance.

1SQN was formed at Point Cook in 1916 as the first squadron of the Australian Flying Corps.

Shortly after its formation, the squadron departed for Egypt for training and soon it was conducting operations throughout the Middle East. It flew a mix of fighter, bomber and reconnaissance aircraft throughout WW1.

So far in 2016, 1SQN has celebrated its centenary by leading the Brisbane Anzac Day parade and holding a squadron dining-in night.

It will continue its year-long celebrations with several more events and flights over the coming six months.

Something to dine out on for the Fighting First

ONE hundred years of aviation history was celebrated in style when No. 1 Squadron held a dining-in night on June 9.

1SQN WOFF Engineering Rodney Knight said the night was the perfect way for squadron members to celebrate the milestone.

“Dining-in nights are a chance to get together and celebrate, and mingle with people you may not see in your day-to-day work,” he said.

“The date was chosen because it was the closest available date to the first day of operations for the squadron, which was June 12, and the commanding officer was keen to hold it on this date.”

Members and guests enjoyed pre-dinner drinks before FLTLT Luke Anderson, the squadron’s aviation medical officer, marched in the colours and formal proceedings got under way.

CO 1SQN WGCDR Steve kept an eye on proceedings from the head table.

The dinner was one of his last official functions with the squadron before handing over command in the near future.

At the other end of the venue, WOFF Knight took on the role of Mr Vice and kept everyone on their toes with his gavel, while members enjoyed a three-course meal and banter.

WOFF Knight said the dining-innight was just one of several events the squadron was taking part in to celebrate its centenary.

He said the squadron had posed for a centenary photograph in front of a historic Bristol aircraft – one of the first aircraft to be used by 1SQN.

“This was quite significant because the owner, off his own bat, stripped the aircraft back and painted it in 1SQN’s colours,” he said.

WOFF Knight said the squadron would be holding an open day in September for friends and family to take a closer look at the Fighting First. 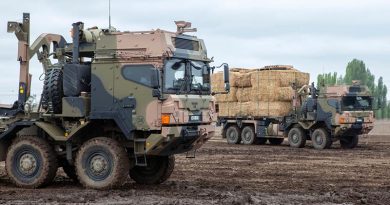 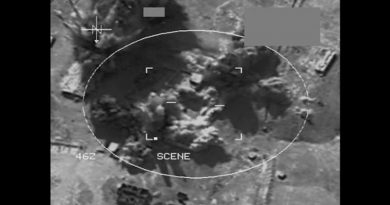 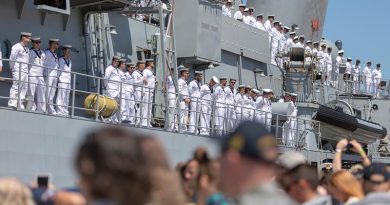