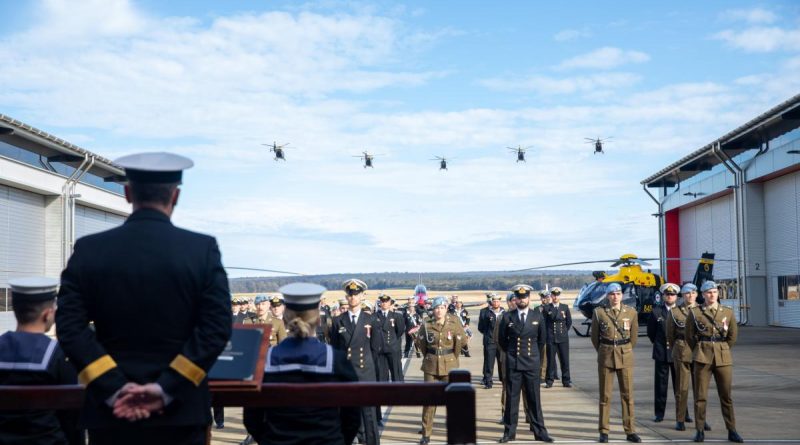 The first aircrew to graduate from 723 Squadron – Joint Helicopter School in its 70th year have received their wings and initial qualifications in a ceremony fittingly featuring a flyover of EC-135 training helicopters.

Army’s ARH Tiger and Air Force’s PC-21 also joined the formalities, along with the Navy band and the 23 graduates’ families and guests.

The graduates included four Navy and nine Army pilots, and two Navy and four Army aircrew, all from No. 723 Squadron, plus four remote pilot warfare officers from No. 822X Squadron.

The graduates had completed a rigorous training course to achieve their initial helicopter qualification, and the Army pilots and Navy aircrewman were presented with their respective service flying brevets, or wings.

Army Lieutenant Alex Powell was awarded dux of the pilot course, while Leading Seaman Benjamin Price and Sergeant Joshua Tewson were duxes of the Aircrewman course for their service. The remote pilot warfare course dux was Acting Sub-Lieutenant Jordon Creek. Their perpetual trophies were donated and presented by Boeing Defence Australia.

“Many aspire to fly with the Royal Australian Navy and Army; however, few realise this dream,” Commodore Frost said.

“You have shown determination during the course of your training. So have your family and friends.

“Your graduation has sealed your part of a great lineage that is interwoven with soldier and sailor – a team that has served our nation with distinction and honour for more than a century.

“You are in a profession where excellence is essential and your desire to improve must be ingrained. You can be sure that your leadership and courage will be tested.”

The graduates will now advance to operational training with their respective services in the coming months, and will ultimately be employed in operational roles in Navy MH-60R, Army ARH, MRH, CH-47 and Navy unmanned aerial systems. 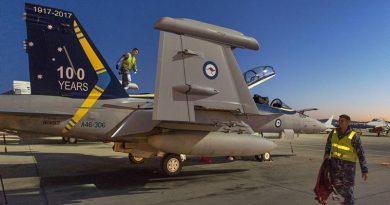 No mention of ‘Crispy’ as Aussies head home from Red Flag