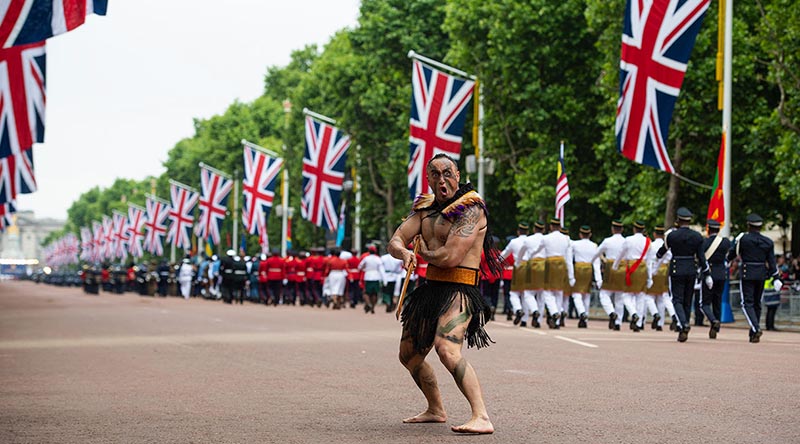 The New Zealand Defence Force (NZDF) and its taua, or warrior party, have added a unique Kiwi spark to the military parade celebrating Queen Elizabeth II’s Platinum Jubilee in London.

The 40-strong party was among 2000 military personnel taking part in the 3.2-kilometre march along The Birdcage and The Mall near Buckingham Palace on a cool and overcast Sunday.

It was led by six Māori warriors who, bearing traditional weapons and playing the role of kiore, or runner scouts, searched the left and right flanks of the main body.

It proved a hit with the London crowd, which had just witnessed the ceremonial best from the British Armed Forces.

Taua member, the Navy’s Petty Officer Te Teira Maxwell, of Te Arawa, said the crowd was relatively quiet until they saw the NZDF marchers with the kiore moving out from the rest of the contingent.

“Then a big roar went up. It was an awesome experience,” he said.

“I’m pretty proud to be involved in such a celebration, and to represent the NZDF and the wider community of Rotorua and iwi Māori,” he said.

Royal New Zealand Air Force Corporal Kumeroa Rimene, of Rangitane and Ngati Kahungunu, was a member of the matataua, or warrior party, repeating a similar role he played at Le Quesnoy commemorations in 2018.

“We are showcasing our unique culture to the world and to show that there is a different side to the military.”

The taua was followed by flag-bearer, the Army’s Second Lieutenant Elese Russell, who had the best view of the reaction.

“It was unreal. When the warriors broke off the crowd went crazy. It was a very special moment.

“The energy of the crowd was amazing. I felt New Zealand really stood out and when the warriors took the lead it was very special.”

Contingent commander, the Navy’s Commander Kerry Tutty, said it was a fantastic moment for the contingent as it represented the NZDF and New Zealand celebrating Her Majesty’s 70-year reign.

“Walking down The Mall and the first lot of warriors break off and the cheers just went up. I can imagine how fantastic this looked to the UK and the world.

“Another special moment was about two-thirds down The Mall and we heard ‘three cheers for the Commonwealth, hip hip hooray’. It was just so incredible.”

New Zealand military representatives have been attending royal jubilees since 1897, when a contingent was sent to Queen Victoria’s Diamond Jubilee.

While in England, the contingent will also play a role in the Service of Thanksgiving at St Paul’s Cathedral prior to the pageant and attend services at the Brockenhurst and Brookwood cemeteries, where New Zealand service people are buried. 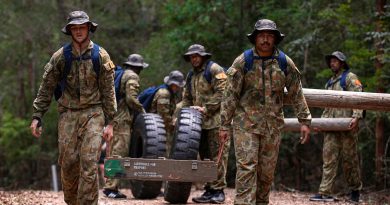 Soldiers push Reds to the limit