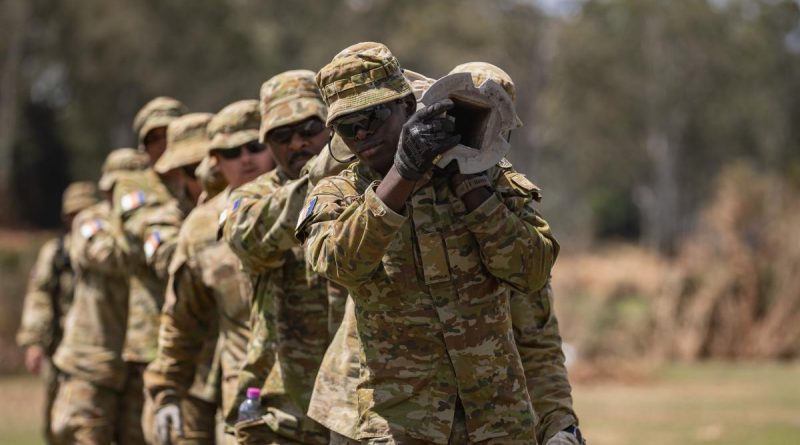 A contingent from 51st Battalion, Far North Queensland Regiment, deployed from across Cape York and the Torres Strait to support Operation Flood Assist 2022.

Deploying to Gallipoli Barracks in Brisbane for tasking, the soldiers are all reservists who were able to organise their civilian lives and work schedules to make them available to help with the clean-up.

Since arriving in Brisbane, they have been hard at work cleaning up at a number of flood ravaged locations and working with a variety of other units.

The headquarters of 51st Battalion, Far North Queensland Regiment, is located at Porton Barracks in Cairns, but the unit maintains a presence through its assigned area of operations.

It is currently manned by reservists supported by a number of full-time personnel.

The battalion’s primary role is to conduct reconnaissance and surveillance in support of border security operations in northern Australia.

“Our team helping with Operation Flood Assist come from all over,” Lieutenant Attwood said.

“We have people from Badu, Sabai and Thursday Islands in Torres Strait. Others come from Aurukun, Weipa, Kowanyama and Cairns.

“We have all sorts of different jobs in civilian life as well – some are government workers, some are self-employed, it’s a bit of everything.”

Lieutenant Attwood is employed in a full-time capacity by the Queensland Department of Education and, like all those from his unit deployed on Operation Flood Assist, he relies on the goodwill of his employers to free him up for this deployment.

“In civilian life, I supervise youth workers in north Queensland high schools, but I love being a reservist,” Lieutenant Attwood said.

“Helping communities in need is very rewarding and I am grateful to be able to do this.”

The contingent is anticipating being based ‘down south’ for at least two weeks assisting the community get back on its feet.

Continued support but nothing new for veterans in budget