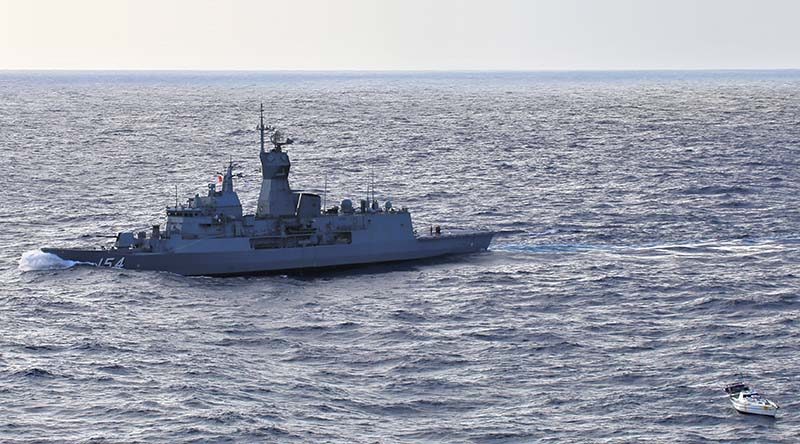 I don’t want to take anything away from the awesome effort involved in the rescue of three sailors off the WA coast this week, by the crew of HMAS Parramatta and especially the physical effort of the RAN diver lowered from the helicopter in very rough and probably cold conditions.

But I do need to take issue with a lack of attention to detail in the writing and checking of the details of this story.

The story as put out in a press release (see below) on 19 March, while the ship was still at sea – and I do at least commend Defence for the timely information – clearly says the stricken yacht was 1300km off the West [sic] Australian coast.

However, the caption for the photo above says it was “nearly 450 nautical miles”.

This is a significant discrepancy in what should be easily verifiable ‘facts’ in a story that Defence PR pushed out to every newspaper, magazine, TV channel and radio station in Australia, and some overseas.

For those editors who noticed the discrepancy, doubt is instantly implanted in their minds and probably in many cases saw the story tossed in the bin as ‘another’ poor effort from Defence PR (which already has a poor reputation among Australian media to start with).

If this happened, the hard-working guys and girls on HMAS Parramatta are done a major disservice.

But, if the story gets published as is, the Australian public may or may not be misinformed – because which figure does the editor who notices run with?

Or, does the caring, pedantic editor highlight the error and let the Australian public pick their own version?

In this day and age of ‘verifiable facts’ and ‘alternative truths’, surely the ADF should be capable of getting simple ‘facts’ right? 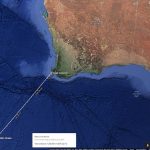 And here’s another thing – “1300km off the Western Australian coast” could actually place the yacht anywhere north of Indonesian to half way to Antarctica!!!

Even the qualifying addition of ‘southern [which isn’t a noun] Indian Ocean’ is a vague arm wave that could encompass anywhere broadly abeam Exmouth to half way to Antarctica.

For the record, the Australian Maritime Safety Authority, in their own press release, more definitively (with a map), placed it “1300 kilometres southwest of Cape Leeuwin”. 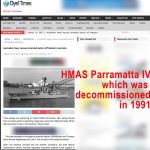 Here’s a funny followup to this story…
A Canadian web site, The Oye! Times, ostensibly “a refreshing news website”, published this press release, with zero editing and, despite the fact there was a link in the press release to photos of the actual rescue, went on their own hunt for a ‘suitable’ file photo – and came up with this beauty…

Anyway, below is Defence’s press release, unedited. And if you want to see CONTACT’s edited version, see here – noting a few other differences….

Three people are recovering on board HMAS Parramatta, after being rescued from a stricken yacht in extremely rough seas, more than 1300 kilometres off the West Australian coast, in the Southern Indian Ocean.

The crew activated an emergency response beacon, (EPIRB) after the 13 metre, South African Registered yacht; ‘Jedi 1’ lost its mast in the rough conditions.

Given the distance involved and the weather conditions, the Joint Rescue Coordination Centre, formally requested Australian Defence Force support in order to reach the sailors as quickly as possible.

HMAS Parramatta, which was already at sea off the WA coast, was tasked at short notice to conduct the operation. A Royal Australian Air Force P3 Orion was also on stand-by but was not required.

An AMSA search and rescue jet established the yacht’s location and provided the crew with communications equipment.

The crew of Parramatta’s Seahawk Helicopter, call sign ‘Blackjack’ sighted the yacht late afternoon on the 18 March 2017, and established communications with her crew.

In difficult weather conditions, which included a heavy South Westerly swell, the South African crew members of ‘Jedi 1’ were quickly winched aboard the helicopter before being returned to HMAS Parramatta in good health.

Once safely onboard Parramatta the three sailors were provided with clean clothes, food and the opportunity to contact family.

HMAS Parramatta’s Commanding Officer, Commander Simon Howard praised the ship and her crew following the successful rescue of the sailors.

“This was a very professionally executed operation, in extremely trying conditions,” he said.

“The Royal Australian Navy is extremely well equipped and our personnel, highly trained to provide specialist assistance to Search and Rescue (SAR) activities in our region.

“We remain ready and able to respond to emergencies in support of our national SAR agency.”

The Jedi 1 crew is being transported back to Albany on board Parramatta and are expected to be back on dry land mid-afternoon tomorrow, 20 March 2017. 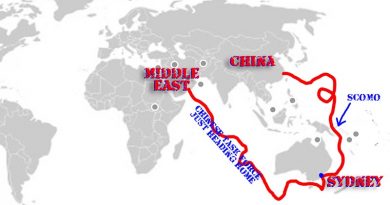