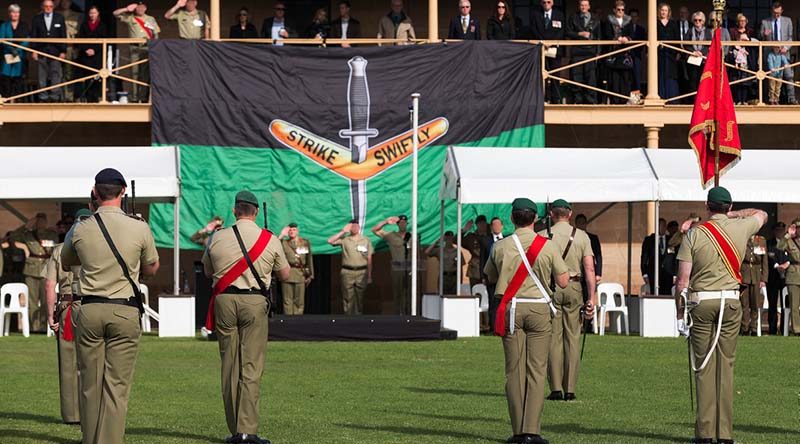 The Australian Army’s 1st Commando Regiment today celebrated the 60th anniversary of the presentation of the unit’s first commando Sherwood-green berets with a parade at Victoria Barracks Sydney – site of that first beret ceremony 60 years earlier.

The parade was reviewed by Governor-General General Sir Peter Cosgrove.

Commanding Officer 1st Commando Regiment Lieutenant Colonel M said the presentation of the commando beret was an important and significant milestone for the individual and the unit.

“The presentation of the Sherwood-green beret identifies that a soldier has passed all the arduous and rigorous requirements to become a fully qualified commando.

“Marking our 60th anniversary, with the parade reviewed by the Governor General, has been a great honour for the Regiment.”

1st Commando Regiment is unique within Army. As the oldest unit within the Australian Army’s Special Operations Command, the regiment has provided unbroken service from the commandos of WWII through to the modern Australian special operations community of today. 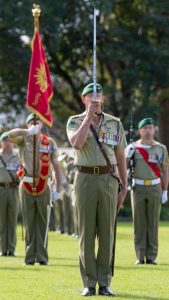 The Regiment contains some of the most skilled, dedicated and combat experienced soldiers within the Australian Army.

Over the past decade, combat operations and the evolution of the commando role has changed the character of the 1st Commando Regiment.

As a result, the regiment is being increasingly relied upon to augment and supplement the efforts of regular Army special-forces counterparts on operations and in training.

The Regiment is an integrated unit comprising a high number of full-time and part-time soldiers, all of whom are required to meet the same rigorous standards of a regular commando.

The primary role of the Regiment is to provide a scalable and deployable mission command headquarters to Special Operations Command.

In addition, the regiment is manned, trained and equipped to provide commando-force elements up to a company size, as well as providing high quality, competent individual commandos to round out, reinforce and rotate with other Special Operations Command capabilities.

Raised in 1955, the regiment has grown from two independent commando companies in Sydney and Melbourne, to a commando signals squadron, and finally, a regimental headquarters in 1981.

In recent years, the regiment has frequently deployed on operations, providing small detachments and individuals to Bougainville, Timor Leste, the Solomon Islands and Iraq, and up to company-sized combat elements to Afghanistan. 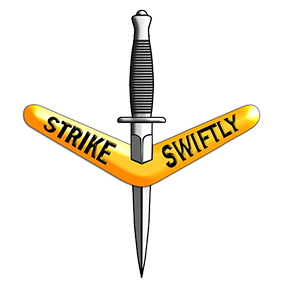 The Sherwood-green beret is the Regiment’s primary head dress and formally recognises the individual achievement of a commando qualification.

It also reflects the Regiment’s close association with the British Army and marine commandos of WWII.

The Regiment maintains a lineage to the 1st Battalion Australian Imperial Force and the 1st Battalion, The Royal New South Wales Regiment (Commando) through the regiment flag and colours of black on Sherwood green.

1st Commando Regiment is known as the “City of Sydney’s own Regiment”.

The regimental badge features a silver WWII-era Australian fighting knife surmounted by a gold boomerang and engraved with the regimental motto ‘Strike Swiftly’..