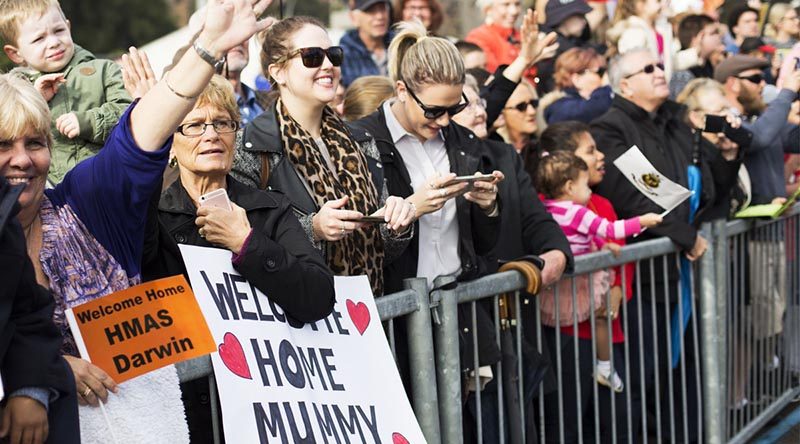 During her Operation MANITOU rotation, Darwin and her Ship’s Company seized a large cache of illicit weapons and narcotics.

“I congratulate you on your success and thank you for your professionalism conducting counter terrorism, counter piracy and narcotic interdiction operations.”

“By removing weapons and drugs from circulation, you made a tangible difference, limiting terrorist organisations’ ability to raise money,” Vice Admiral Barrett said.

“Every family here today can be justifiably proud of their loved one. Each member of the Ship’s Company has contributed to the success of our mission, from the boarding party which boarded suspect vessels, to the chefs who served over 100,000 meals to keep the ship operating around the clock.

“Since departing Australia on 30 December 2015, Darwin has sailed over 50,000 nautical miles, 30,000 of which were on patrol within the Middle Eastern Region as part of British-led Combined Task Force 150.

“We worked with our multi-national partners to keep trade routes safe for legitimate mariners and the entire Ships Company is looking forward to some well-earned rest with their loved ones,” Commander Henry said.

This was Darwin’s seventh deployment and the 62nd rotation of a Royal Australian Navy ship to the Middle East region since 1990.  HMAS Perth took over from Darwin and continues Australia’s commitment to the security of the region. 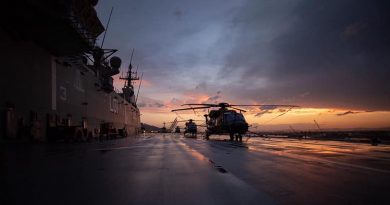 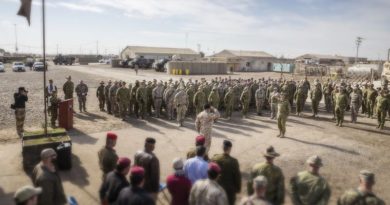