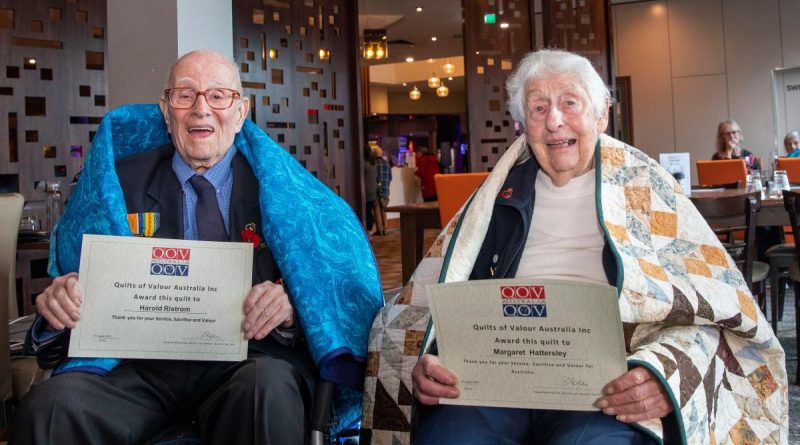 Three World War 2 Navy veterans instrumental in supporting General Douglas MacArthur’s return to the Philippines, cracking enemy codes, and facing down enemy fire, were honoured for their service at an emotional ceremony on August 9.

Two of the veterans, Harrold “Hiram” Ristrom and Margaret Hattersley (nee Hartley), were able to attend the ceremony at Bentleigh RSL in Victoria and were presented with a Quilt of Valour and a recognition of service certificate by Commodore Greg Yorke, Senior Naval Officer – Victoria.

“There’s only a handful of World War 2 veterans left – I’m honoured to know them and acknowledge what they did for us during the war, which has led to the freedom we share today,” Commodore Yorke said.

Mr Ristrom, 98, who was a landing craft coxswain in HMAS Kanimbla I, recalled a busy but peaceful day on October 20, 1944, when his ship landed about 1000 United States 21st Infantry Regiment combat soldiers and their equipment onto Panaon Island in the campaign to retake the Philippines from the Japanese.

That same day, General Douglas MacArthur waded in knee-deep water to come ashore at Leyte Bay, declaring “I have returned”. The battle of Leyte Gulf, the largest naval battle of WW2, devastated the Japanese fleet.

Mr Ristrom said the locals were overjoyed to see the Australian ships Kanimbla, Manora and Westralia arrive, immediately bartering for food and clothing.

“Some of our fellows got straw hats and fighting cocks in exchange for clothing,” Mr Ristrom said.

The calm landing was a welcome break as Mr Ristrom recalled a night under direct fire in Balikpapan in Borneo.

“I thought I could hear the birds chirping in my ears, but they were bullets whizzing past, and there was the odd mortar shell dropping nearby,” he said.

When asked if he was scared, he laughed and said, “Well, you just got on with it.” He said the skies during the war were like a “Christmas cake”.

“If you held the cake above your head and looked up, you’d see all these black currents – well that’s what the sky looked like, absolutely filled at times with black shell burst. Amazing to think a Japanese plane could get through that,” he said.

His action stations were below deck and he listened as the officer of the watch broadcast enemy planes flying over.

“I would hear the guns muffled. When the 4-inch went off it would shake all the dust off the rafters and the asbestos off the pipes,” Mr Ristrom said.

The certificate awarded to Mr Ristrom at the ceremony acknowledged his service from 1942 to 1946, crediting the many landings and the battles his ship had engaged in.

He was also acknowledged for his commitment to preserving Navy legacy through involvement with naval associations.

Friends and family, including Mr Ristrom’s great granddaughter attended and heard their stories.

“One memory that’s not to do with a battle or action, although there’s plenty of those, is bringing long-serving members from the 7th and 9th Division, Australian Imperial Forces, home to New Farm wharf in Brisbane in 1945,” Mr Ristrom said.

“We were extremely proud to be given that honour.”

President of Quilts of Valour, Victoria, Wyn Roper, was instrumental in bringing the quilts to life, and her husband, Bill, presented them alongside Commodore Yorke.

“The people volunteered their own time to put these together, and they take hours to make; it’s quite significant,” Commodore Yorke said.

“You could see both Hiram and Margaret were emotional about being recognised and were thrilled to receive the quilts.”

Made “with love, care, and at times some tears”, the quilt now takes pride of place on Mr Ristrom’s bed.

“I’m amazed; I slept for eight hours solid with this quilt, which I normally never do,” he said.

Mr Ristrom is the last of the 25 landing craft coxswains who served in Kanimbla I.

Commodore Yorke also awarded Mr Ristrom the Philippine Presidential Unit Citation to Kanimbla I for the ship’s participation in the war against Japan.

Margaret Hattersley’s admiration of a neighbour’s Women’s Royal Australian Naval (WRAN) Service uniform prompted her to enlist. She became a WRAN Signaller and cypher clerk and worked at the top-secret codebreaking unit, Fleet Radio Unit Melbourne, which was known as ‘Monterey’.

A collaboration between Australian, US and UK naval forces, it was in effect Australia’s version of Bletchley Park. She was later drafted to Canberra, where she read Morse code from tapes sent at high speed, and interpreted the messages onto a typewriter.

The certificate awarded to Mrs Hattersley, now 95, acknowledged her dedication to service from 1945 to 1946 and her code-breaking skills.

When presented with the quilt, Mrs Hattersley ensured the Bletchley Park Medallion she had received in 2009 for her work with the British codebreaking establishment was displayed.

Later that day, the third veteran to be honoured, 98-year-old Frank Barrile, was awarded the ship citation, certificate and a quilt at his aged-care home with his 100-year-old wife Agnes by his side.

Mr Barrile served from 1942 to 1946 on board Assault and Kanimbla I alongside Mr Ristrom.

He was a gunner during action stations and worked on the 20mm Oerlikon anti-aircraft gun in Kanimbla.

“It wasn’t a very pleasant spot to be in, I can tell you that,” Mr Ristrom said.

Sadly, Mr Barrile, who suffered from dementia, has since died at his aged-care home in Melbourne. 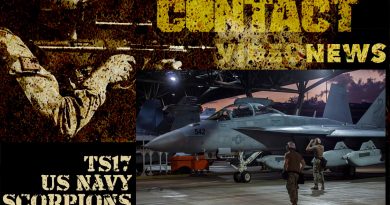 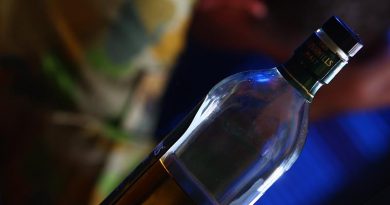