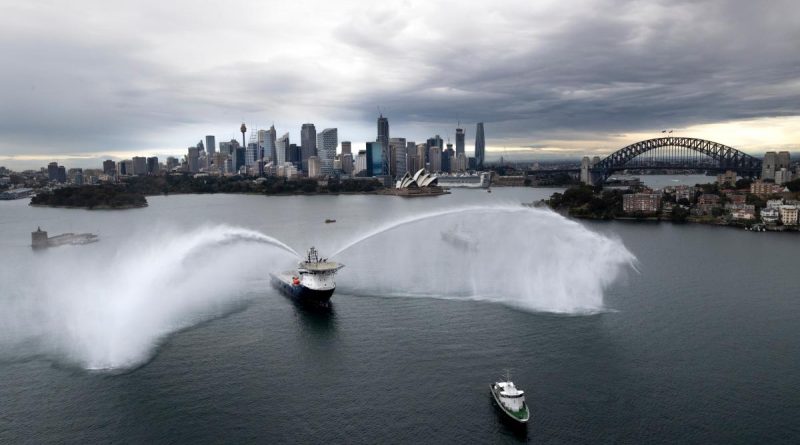 For the first time, the National Support Squadron had an opportunity to have three of its ships in Sydney Harbour at the same time when MV Reliant was welcomed to Sydney on August 12.

Supported by a 723 Squadron EC-135 helicopter, the three ships sailed in formation before positioning off Kirribilli Point where Reliant demonstrated her impressive fire-fighting water cannons with the iconic Sydney Harbour Bridge and Opera House in the background.

It will be a long time before the three ships will have the opportunity to be in company again as Reliant will soon deploy to the Pacific.

After a brief visit to its home port of Brisbane, where humanitarian and disaster relief stores will be embarked, Reliant will transfer to the Defence register, thus becoming Australian Defence Vessel Reliant, before sailing for the South-West Pacific where it will be almost continuously deployed.

Residing within Shore Force, the naval auxiliaries of the National Support Squadron provide a wide range of services to the fleet.

The addition of Reliant with its bright sapphire-blue hull and white tops of the National Support Squadron livery brings a new role and mission to the squadron.

In welcoming Reliant Captain Michael Oborn, of Shore Force, said Reliant was a significant addition to the National Support Squadron.

“It will greatly contribute to the government’s Pacific Step Up program,” Captain Oborn said.

“Reliant will shortly deploy for the South-West Pacific where I expect it shall provide invaluable assistance to our Pacific family.”

The naval auxiliaries of the National Support Squadron are manned by a collaboration of Royal Australian Navy and merchant mariners.

Each ship has a permanent embarked naval liaison officer and are crewed by the commercial vessel operator, Teekay Shipping Australia Pty Ltd.

Additional mission elements are embarked when required from within the Australian Defence Force and other government agencies.