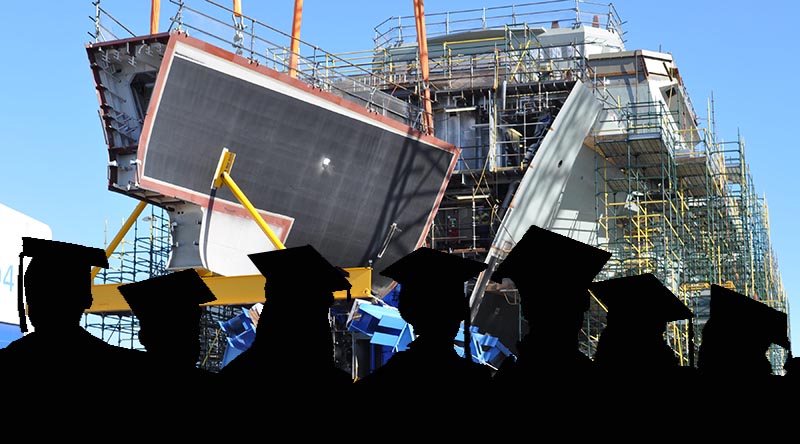 A new naval shipbuilding ‘taster course’ endorsed by Australia’s defence industry is set to be rolled out to its first cohort of students across Australia.

The on-line course will be offered by TAFE SA but will be available to students across Australia to learn about the government’s National Naval Shipbuilding Enterprise – including key concepts, terminology and projects.

“This will put the students on a pathway to gaining employment within the enterprise,” Minister Price said.

“By 2030 Australia’s National Naval Shipbuilding Enterprise will employ about 15,000 people across the nation, from trades to PhDs.”

Minister Gardner said while the course was online and self-paced [though the web site specifically says it is a 4-week course with specific start and end dates], there were chat rooms to give students the chance to talk with lecturers and other students to further their understanding.

“Employers will have access to skilled jobseekers who are well prepared to enter the industry,” Minister Gardner said [while this editor vomited].

“The focus is on preparing students for the shipbuilding jobs of the future and ensuring they have the appropriate skills and experience as the enterprise expands.”

Minister Price said individuals from outside shipbuilding who completed the course would be exposed to industry specific training to address the critical skills and knowledge needs of the current and future national naval shipbuilding workforce.

“The Naval Shipbuilding College and TAFE SA have been working closely on skills development for some time,” Minister Price said.

The Introduction to Naval Shipbuilding short course will start in April, with additional courses scheduled for May and June.

To find out more about the how you can enrol in this course visit: Introduction to Naval Shipbuilding – TAFE SA.