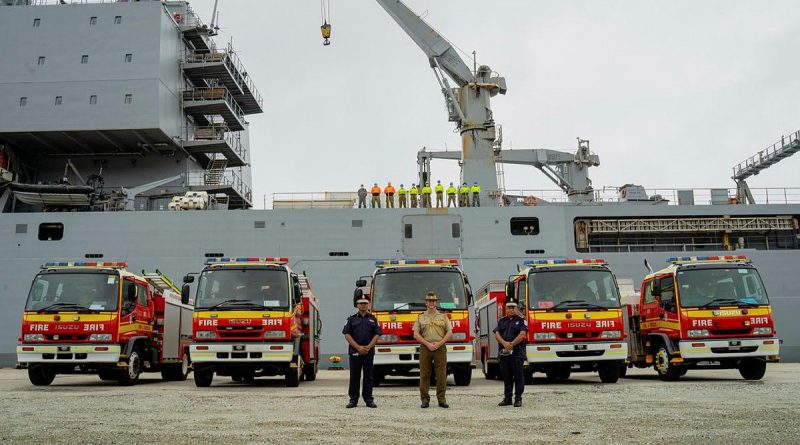 In a show of appreciation for the support Papua New Guinea (PNG) gave Australia during last summer’s bushfires, HMAS Choules has delivered five fire trucks, donated by the Queensland Fire and Emergency Service (QFES), to the PNG Fire Service.

Excited firefighters from the PNG Fire Service lined the dock at Port Moresby to see the trucks arrive this month.

PNG Fire Service’s Chief Fire Officer Roo thanked the QFES and the ADF for the delivery.

“We’re extremely grateful to the Australian Defence staff in PNG, HMAS Choules, the QFES and all others who have assisted in the donation of the fire trucks,” Chief Roo said.

The fire trucks were craned into HMAS Choules in Brisbane on February 14 for the voyage to Port Moresby.

Commanding Officer HMAS Moreton said the delivery of the trucks was a thank you to PNG for the nation’s support during the bushfires 12 months ago.

“A year ago, 100 PNG Defence Force personnel came to Australia to assist in the Black Summer bushfires, standing shoulder to shoulder with their ADF counterparts,” Commander Hay said.

“Not only are these fire trucks a symbol of gratitude to the PNG Defence Force’s support during that time, but it is also represents a continuation of the long-standing relationship and partnership of capacity building and sharing between Australia and PNG.”

QFES Commissioner Greg Leach said this was the largest donation of appliances and equipment from the QFES to the PNG Fire Service in their 29-year partnership.

“These five fire trucks have served Queensland well and now they have been refurbished by our workshops and are going to PNG where they’ll serve out the rest of their time,” Commissioner Leach said.

The fire trucks were also fitted out with updated breathing apparatus, ensuring they were compliant with existing systems in PNG.

CAPTION: A fire truck donated by the Queensland Fire and Emergency Service to Papua New Guinea is unloaded off HMAS Choules at Port Moresby. Photo by Roberto Garcia.

The Assistant Defence Adviser to PNG, Lieutenant Colonel Murray Heron, praised the efforts of all involved in the delivery of the fire trucks.

“This is another excellent milestone for our two nations, which has called on various services, agencies and organisations from Australia and PNG to bring it all together,” Lieutenant Colonel Heron said.

Getting the fire trucks refurbished, fitted out and delivered to PNG was a joint effort involving the QFES, Defence members from HMAS Choules, HMAS Moreton, 1st Joint Movement Control Office – Brisbane, JTF 637 and civilian company Wagner’s Wharf, together with Defence and Department of Foreign Affairs and Trade staff.

Loading in Brisbane and unloading in Port Moresby was done with stringent contactless measures and protocols to minimise the risk of transmitting COVID-19 to the Pacific.

“It was a significant logistical exercise and we couldn’t have done it without the partnership of the ADF,” Commissioner Leach said. 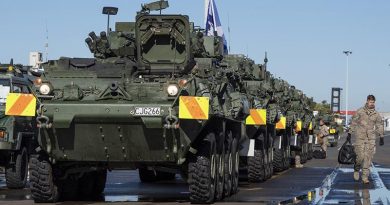 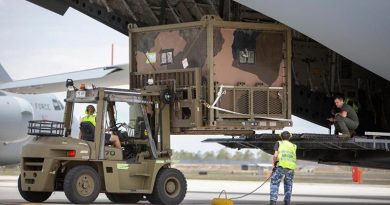