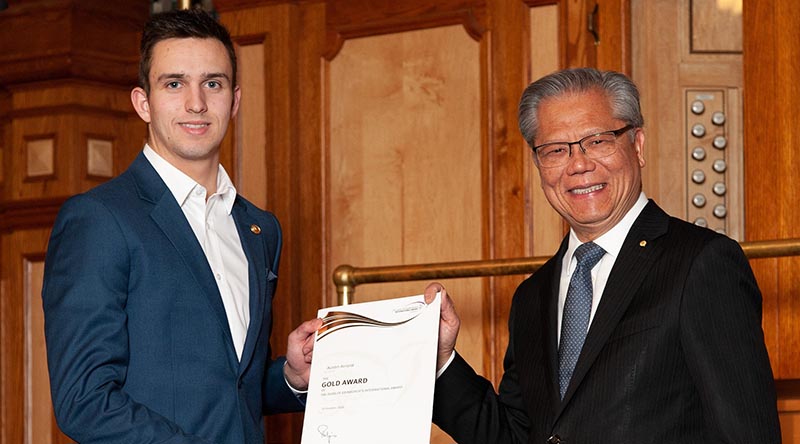 Cadet Sergeant Austin Arnold received a special certificate from the Governor of South Australia at Adelaide Town Hall on Thursday 15 October – recognising his completion of the Gold Award of the Duke of Edinburgh’s International Award.

CSGT Arnold is a member of No 604 Squadron, Australian Air Force Cadets.

As a Leading Cadet, he was selected to undertake flying training with the AAFC under a scholarship, and flew from Gawler and Balaklava airfields in the DG1000S soaring sailplane operated by No 906 Aviation Training Squadron of the AAFC.

At 604 Squadron’s end of year parade last year, then Cadet Corporal Arnold was announced as the squadron’s recipient of the Aviation Award for 2019.

He has since continued his training as a member of Balaklava Gliding Club.

Through his Cadet service, CSGT Arnold has earned the Advanced Stage qualification badge and the Gold Rifle badge for firearms safety training.

CSGT Arnold told the Public Affairs Officer for Aviation Operations Wing, Flying Officer (AAFC) Paul Rosenzweig: “The highlight of my Cadet career was being able to qualify for all three Duke of Edinburgh’s badges – the Bronze, Silver and Gold Awards”.

CSGT Arnold’s efforts to improve his knowledge and ability in aviation contributed to the Skills section of his Gold Award.

The Duke of Edinburgh’s Award is an enriching program in which young people aged 14 to 25 participate in a number of activities and non-formal education over a set length of time to qualify for the Bronze, Silver and Gold Awards. Each level is progressively more challenging.

The Award was founded in 1956 by HRH The Prince Philip, Duke of Edinburgh. It now operates in more than 130 countries and territories across the globe, helping 14-24 year olds to become committed, responsible and fulfilled citizens of the world. To become World Ready.

The Gold Award takes particular commitment, perseverance and focus. Congratulations CSGT Arnold on achieving this prestigious award through your service with the Australian Air Force Cadets.

Further information on the Award can be found here.