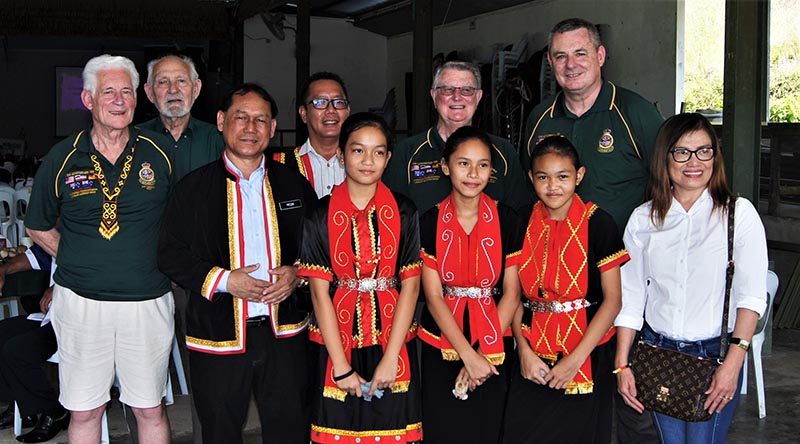 Members of the National Malaya-Borneo Veterans Association of Australia have conducted a special reunion in Borneo, revisiting several sites in the Bau district of Sarawak where they served during Confrontation.

The Indonesian Confrontation with Malaysia was an undeclared war fought in Malaysia and north Borneo from 24 December 1962 until the signing of a peace treaty in Bangkok on 11 August 1966.

Following the service of commemoration in Kuching, the reunion party visited three schools in villages near the border with Indonesian Kalimantan, where Australian forces were based in 1965-66.

At each school, the President of the SA/NT Branch, NMBVAA Brian Selby presented a donation from the Branch’s fundraising efforts, to assist with projects and activities for the students, which might not otherwise be funded.

They were supported by a field artillery gun position from 102 Field Battery, RAA – a Fire Support Base with one L5 105 mm Howitzer.

In Kampung Serabak, 102 Field Battery operated one L5 105 mm Howitzer in support of 4RAR operations in the mountains near the Kalimantan border.

This position is now the site of a public school – Sekolah Kebangsaan Serabak.

The villages of Serabak, Suba Buan and nearby Serikin sit on one of the main trading routes between Indonesian Kalimantan and the township of Bau.

The Australian patrol bases sat astride these routes, with the mission of protecting the capital Kuching by defending the approaches to Bau – which was recognised as ‘the key to the door of Kuching’.

This is the old site of St Mark’s School, which in 1963 became a forward base for 42 Commando Royal Marines (the school relocated to Ngisilu at that time).

From March to July 1965, ‘A’ Company of 3RAR established the battalion’s northernmost patrol base here to guard the line of approach from Indonesia to Kuching.

Then ‘B’ Company, 4RAR was based at Stass, from April to August 1966. In 1973, when the Malaysian Army gave up the site, the school returned here under the new name ‘Sekolah Kebangsaan Stass’.

The three schools have been granted Honorary Membership of the SA/NT Branch, NMBVAA.

Brian Selby told the media in Kuching: “We are glad to be able to come back here to see these places after all these years. These places bring back a lot of memories for us when we were serving in the army and we are also glad that our work here during the time contributed to the peace between Malaysia and Indonesia”.

Finally, the party visited Kampung Gumbang. At nearby at Bukit Knuckle, ‘B’ Company of 3RAR had its patrol base, while in 1966, ‘A’ Company of 4RAR had their patrol base at Kampung Gumbang itself. These rifle companies were also supported by a field artillery position at Stass established by 102 Field Battery: a Fire Support Base with two L5 105 mm Howitzers.

In his commemorative address in Kuching on 29 August, the Australian High Commissioner to Malaysia, Mr Andrew Goledzinowski AM paid tribute to the Branch’s commitment to remember Malaysia, one of the countries “with whom Australia has stood side-by-side against aggression in the past, in wartime and in peacekeeping”.

The ceremonies and overseas visits of the SA/NT Branch, NMBVAA reaffirm the common values and deep friendship that we Australians share with our Malaysian counterparts.

Some locals have since provided some interesting feedback. From Kampong Serabak: “Welcome back our defender”.

From Kampung Gumbang: “I was then about 6 years old . . . I was not at school yet but I learned from the army a few words like ….. come on chop chop, air-drop is coming”.

A vigorous supporter of the Australian reunion visits is Dato’ Lim Kian Hock, Heritage Advisor with the Sarawak Tourism Federation. He said: “We are touched by your generous act of giving back to the communities and school by your visit and presentation of assistance. Your kind gesture will inspire the heritage education for the school students to understand the essence and responsibilities to achieve peace in society and the world. We wish to record our appreciation”. 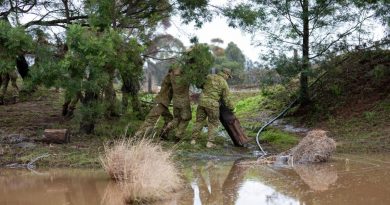