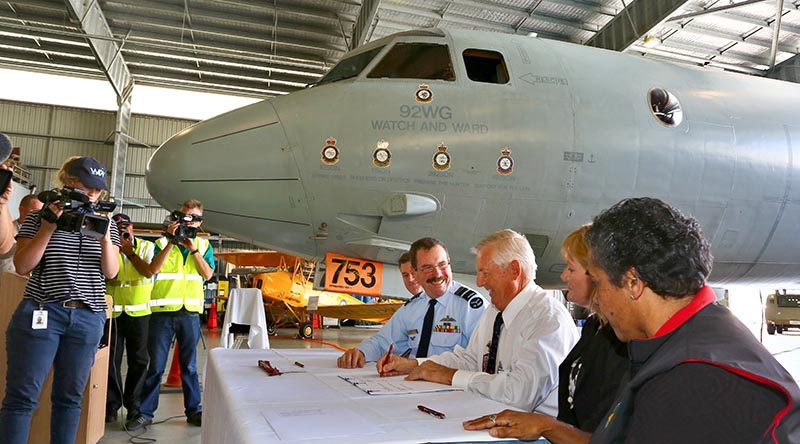 On December 12, 2016, the Lockheed AP-3C Orion A9-753 was delivered to HARS Headquarters at Albion Park, New South Wales, Australia.

Almost 11 months later and, with a mountain of paperwork signed and red tape cut through, the ‘keys’ to the aircraft were formally handed over at a well-attended ceremony at the Historical Aircraft Restoration Society Museum on 3 November 2017.

Chief of Air Force Air Marshal Leo Davies flew in from Canberra on a RAAF VIP Fleet CL-604 Challenger aircraft to do the honours.

Upon officially receiving the Orion, the Historical Aircraft Restoration Society makes it’s own history by becoming the first civilian aircraft museum in the world to take ownership of a military aircraft while the type is still in service.

The AP-3C, in service is fitted with a variety of sensors, including digital multi-mode radar, electronic support measures, electro-optics detectors (infra-red and visual), magnetic anomaly detectors, friend or foe identification systems and acoustic detectors – all of which were removed before delivery to HARS.

In 2012 the AP-3C Orion ceased 10 years of operational service in the Middle East – the HARS airframe, A9-753, among the aircraft rotated through the theatre – completing 2400 missions with more than 3500 personnel deployed throughout the period.

The AP-3C Orion is in the process of a graduated draw down to retirement with the final aircraft planned withdrawal date in 2021.

< A9-753 avoided the cruel fate of other Orions

The AP-3C will be replaced by the P-8A Poseidon and MQ-4C Triton – with four Poseidons already delivered to the RAAF and a fifth before the end of this year.

The RAAF has already ordered eight MQ-4C Tritons, with the first aircraft to be delivered soon, with all eight aircraft fully operational by 2021.