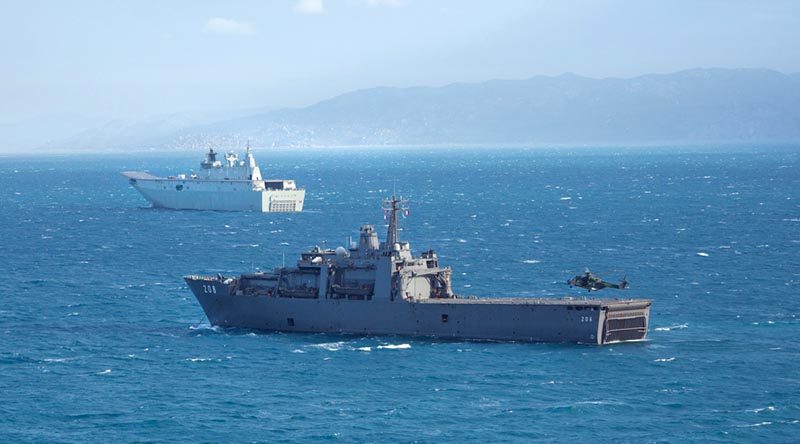 HMAS Adelaide, one of the Royal Australian Navy’s Canberra-class amphibious ships, has completed amphibious-landing-craft and aviation training with the Republic of Singapore’s amphibious ship, RSS Resolution while deployed off the east coast of Australia.

As a part of the Australian Defence Force Joint Task Group Indo-Pacific Endeavour 2017 (IPE 17), HMASAdelaide and the Republic of Singapore’s Endurance Class RSS Resolution, tested their capabilities in an exercise that evaluated the ability of the two nations to operate together should they be tasked to respond to a regional natural or humanitarian disaster.

All trials proved successful, highlighting the strong defence relationship and interoperability shared between Australia and Singapore.

Commander Joint Task Group 661.1 Captain Jonathan Earley said close cooperation with our regional partners is the cornerstone of any Australian response to a natural disaster.

“Activities such as these with our Singaporean friends, not only deepens mutual understanding of our respective capabilities in supporting humanitarian events, but also reinforces to the region, Australia is ready to help should a disaster occur,” Captain Earley said.

RSS Resolution is in Australian waters as part of a Singaporean unilateral training exercise, Exercise Wallaby.

HMAS Adelaide is leading a task group of several  RAN warships including HMA Ships Darwin, Melbourne, Toowoomba, Parramatta, and Sirius, for Indo-Pacific Endeavour 2017, an ADF deployment focused on demonstrating the ADF’s Humanitarian and Disaster Relief regional response capability as well as further supporting security and stability in Australia’s near region through bilateral and multilateral engagement, training and capacity building.

No COVID-19 at HMAS Watson – official