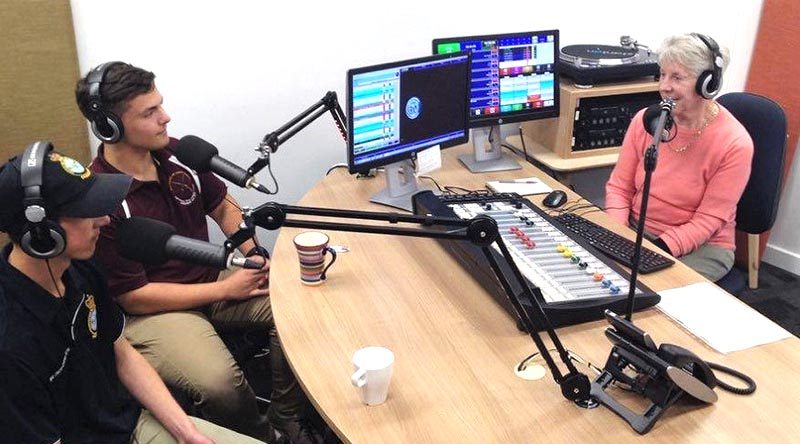 Recently two Air Force Cadets from No 6 (City of Adelaide) Wing were interviewed by Fiona White on “Service Voices” regarding their service to the community and career aspirations.

This was just the second time Cadets had been interviewed for the program.

Alex Barrott-Walsh from No 619 (City of Onkaparinga) Squadron, currently aged 18, is looking to a career in the RAAF.

Alex enlisted in the Air Force Cadets in November 2011 and, during his 6 years of service so far, has completed the Proficiency Stage of the AAFC home training curriculum, and has qualified for the Single Gold Rifle Badge through completion of the .22 Firearms Training Elective. In addition he has completed a residential promotion course and gained promotion to Cadet Corporal (CCPL), and is a Silver Award participant in the Duke of Edinburgh’s International Award.

Eric Symons from No 601 Squadron (Keswick Barracks), currently aged 17, is considering a career in the RAN.

Eric joined the Air Force Cadets in August 2013 and through completion of residential promotion courses has risen to now hold the rank of Cadet Flight Sergeant (CFSGT). He too has completed Proficiency Stage and is firearms qualified, and in addition has gained the prestigious ADF Cadets Adventure Training Award. In addition, he is a Gold Award participant in the Duke of Edinburgh’s International Award.

In their interviews, these young men described how their service in the Air Force Cadets was helping them prepare for a career in the Australian Defence Force.

Pilot Officer (AAFC) Paul Rosenzweig, 6 Wing Public Affairs & Communication Officer, said “One of the many benefits of service in the Australian Defence Force Cadets is the opportunity for cadets to get a feel for what the military lifestyle is like, as a sample before they consider entry into the ADF”.

“Service Voices” is broadcast on Radio Adelaide 101.5 FM in and around the Adelaide metropolitan area, on digital radio and online, and these archived stories are also available online.

Alex and Eric’s interview can be found here.