A GREAT LINK TO A FUTURE CAREER

During 2017, No 600 (Aviation Training) Squadron will be providing increased opportunities for Air Force Cadets in South Australia and Mildura to achieve their dream of flying.

The process starts with Pilot Experience Flights, building on the theoretical knowledge gained from the home training curriculum.

And then there are various flight simulators, including the historic Link Trainer ‘A13-123’ at the Torrens Parade Ground building in Adelaide.

The Link Trainer holds a significant place in aviation history – it was the first true flight simulator, and provided safe training to hundreds of thousands of student pilots during the 1930s and 1940s.

Technically speaking, it is an Instrument Flight Rules (IFR) flight simulator for a piston-engine aircraft with one engine.

It was used to train pilots to fly with no outside visibility, using only instruments – at night, in cloud and in bad weather.

In the late 1920s, Edwin A Link learned to fly while working for his father, a manufacturer of organs and pianos in Binghamton, New York. The Great Depression meant that flying lessons were too costly, so Link reduced the need for actual lessons by learning rudimentary piloting skills using a ground aviation trainer. He developed a ‘pilot trainer’ in 1928, using his expertise in air-driven pianos and pipe organs – he used organ parts and compressed air to build the first flight simulator.

Link constructed a machine, more or less resembling an aircraft, which could imitate its movements around its three axes. Organ bellows and a motor provided the means for the trainer, mounted on a pedestal, to pitch, roll, dive and climb as the student ‘flew’ it.

In 1931, Link received a patent on his ‘pilot maker’ training device, and he began operating a flying school. In 1932, Link Aviation of Binghamton, New York sold 100 Trainers for amusement. In 1934, the US Army Air Force was charged with conducting nightly mail flights, to try and reduce the number of accidents which were occurring. The importance of flying by instruments became evident, and Link got his first order for the trainer.

The RAAF acquired 161 Link Trainers of various models between 1938 and 1957, all allocated the Link Trainer stores number ‘A13’, part of the ‘A’ series allocated to aircraft although A13 had been avoided up to this point. The Link Trainers continued in use until 1965, after which some remained with units of the Air Training Corps (now the Australian Air Force Cadets) or as RAAF display items.

Using these, Air Force Cadets experience flying with no external visibility – they are able to gain an experience that relates to the primary and secondary effects of the flight control surfaces (as they learn in the Aviation Basic subject), as well as the instrument panel and general aviation terms (as taught in Aviation Proficiency). This experience assists the cadets to better understand those home training subjects, in a pleasurable learning environment.

The ‘pilot’ sits enclosed in the cabin of the Link Trainer, which, having no windows, is completely dark inside. Small lights illuminate the control panel, and the pilot wears a headset to maintain communications with the flight instructor.

The vintage Link Trainer, older than the Australian Air Force Cadets and its predecessor the Air Training Corps, is still helping young Australians reach for the stars. 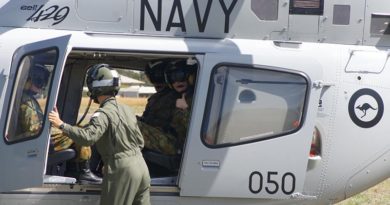 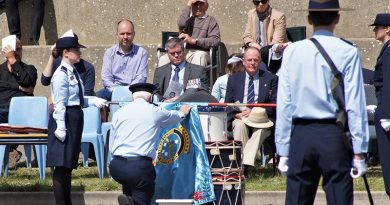 One thought on “The vintage Link Trainer”