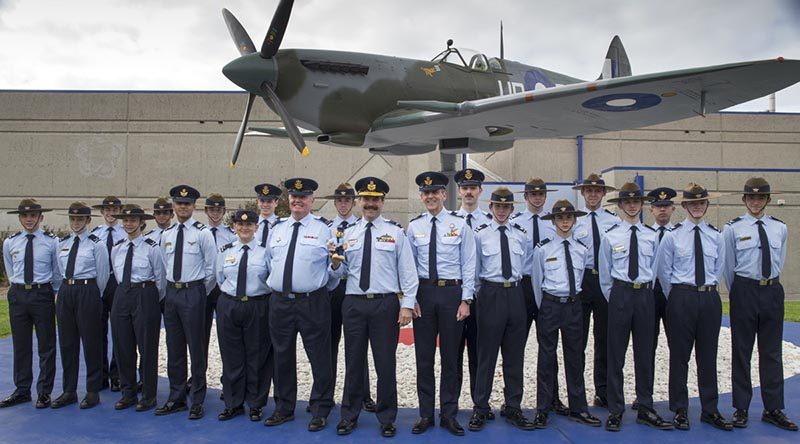 Gifted by Friends of the RAAF Museum, the Spitfire replica is on display outside the museum and represents a Mk VIII Spitfire operated by Number 79 Squadron in the South West Pacific Area of operations during World War II.

Chief of Air Force Air Marshal Leo Davies thanked those who made the new display possible and said it was both a fitting tribute and an important addition representing an important era in military aviation.

“The display is the result of great support by the Friends of the RAAF Museum and corporate donors,” Air Marshal Davies said.

“It takes pride of place outside of the RAAF Museum where Air Force personnel and visitors can acknowledge the achievements of 79 Squadron.

“Spitfires was flown by 79 Squadron between 1943 and 1945, during World War II, where five pilots were lost to enemy action.

“This Spitfire will serve as a reminder of their courage and commitment.”

After disbanding in 1945 at cessation of hostilities, No 79 Squadron reformed in 1962 operating Mirage fighter jet, only to disband again in 1988, and reformed again in 1998 to operate the Hawk 127 lead-in-fighter trainer at RAAF Base Pearce, Western Australia.

David Gardner, Director of the RAAF Museum, said it had been a big but very rewarding task to get the project completed.

“We have received such amazing support from the Friends of the Museum who have worked tirelessly to make this project happen,” Mr Gardner said.

“They, the Friends, have also had donations from various sponsors including Rolls Royce, the RAAF Association [National, State-Vicoria and Ballart sub-branches), and other smaller donors.

“Without the support and donations of our generous sponsors this project would not have been possible.”

The full-size replica, weighing almost 1500kg, was purpose-built for the museum from fibreglass, taking into account the extreme weather conditions that Point Cook experiences.

Manufactured in the United Kingdom by Gateguards, the replica had to be dismantled to be shipped to Point Cook before being reassembled and placed on a 2.7 metre-high pole.