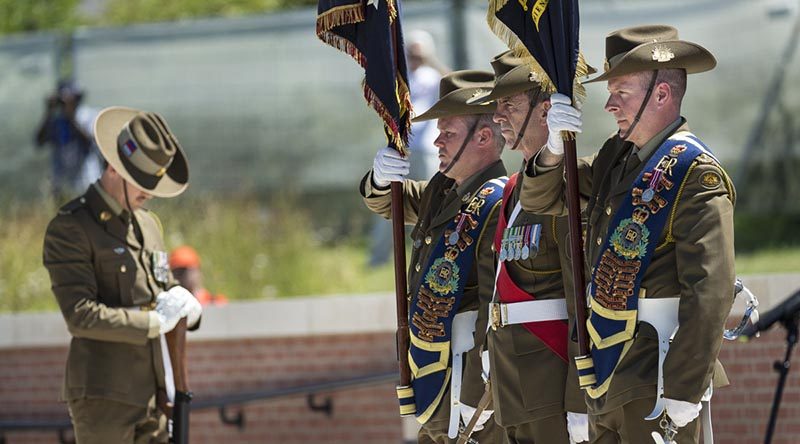 Around 80 members of the Australian Defence Force honoured the service of those who fought on the Western Front during the First World War overnight with commemorative services to mark the 100th anniversary of the Battle of Fromelles on 19 July. 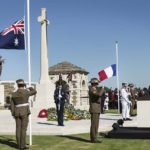 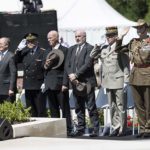 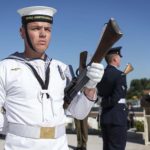 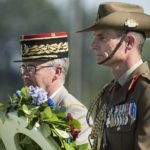 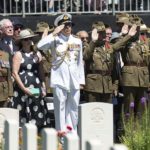 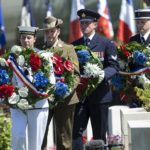 Lieutenant General Campbell said it was important for today’s ADF to continue to recognise and remember the servicemen and women of 100 years ago.

“In World War One, our nation sustained loss of life and injury on a catastrophic and unprecedented scale. Barely a home, or a family in Australia, was untouched by loss or grief,” Lieutenant General Campbell said.

“The Australians who served on the Western Front – those who gave their lives together with those who returned home – helped shape not only the course of world history but also our sense of nationhood.

“One hundred years on, their service continues to resonate with today’s sailors, soldiers, airmen and airwomen.

“The nearly 300,000 Australians who served on the Western Front continue to hold a special place in Australia’s history.”

The Battle of Fromelles took place over the period 19 – 20 July 1916 and was the first battle fought by Australians on the Western Front.

It became known as Australia’s bloodiest 24 hours with 5533 Australian casualties, including 1917 lives lost.

The ceremonies at Fromelles (Pheasant Wood) and VC Corner will include a Catafalque Party, with dignitaries laying wreaths.

Both the Australian and French National Flags will be raised by members of Australia’s Federation Guard and members of the 31st Battalion will be parading their Colours.

Others would work by night and struggle under the weight of their friends. Sergeant Simon Fraser of the 57th Battalion remembered the effort: “I could not lift him on my back; but I managed to get him into an old trench and told him to lie quiet while I got a stretcher. Then another man sang out ‘Don’t forget me cobber’.”

The unknown soldiers that fell during the Great War are emblematic of its mass-slaughter and mass-grief, of loss uncounted and death that can’t be imagined.

The industrial scale of the killing, the machines and weapons that swept away life, created limited time for recognition, recovery or even burial. This resulted in the moments that upon death we take for ourselves and our loved ones being lost.

Today we remember the unknown soldiers here at Fromelles, for their service, we honour them for their sacrifice, and we ensure that they continue to live in the memories of all Australians.

Fromelles became the place where Australia first realised the full force and horror of industrialised warfare.

The Australian official war historian Charles Bean recalled the scale of this devastation here at Fromelles, “We found the old no man’s land simply full of our dead … the skulls and bones and torn uniforms were lying about everywhere … the wounded could be seen everywhere raising their limbs in pain or turning hopelessly, hour after hour, from one side to the other”.

It was a field of men stripped of names, features or identity by the brutal destruction of artillery, guns and bayonets.

After the battles, a chorus of nameless voices crying in pain or agony could be heard by the survivors. It was the nature of the scale of this death that those still safe did not know whether the cries came from dying friends or from soldiers they had never met.

In the days after the battle, soldiers would attempt to go out into no man’s land to retrieve their fallen mates. They often became casualties themselves.

The grief and uncertainty of families with no plots for their loved ones was immense. Pieces of their lives could never be fully recovered.

On returning from war the soldiers of this battlefield saw this loss stare back at them from the families of lost mates.

Captain Hugh Knyvett recalled: “I discovered one day how deep the knife of war had cut when I spoke to a grandmother and daughter working a large farm; as with dumb, uncomprehending pain in their eyes they showed me the picture of son-in-law and husband who would never return. Rights of peoples and the things for which nations strive had no meaning to these two, but from out of the dark had come a hand and dragged from them the fullness of life, leaving only its empty shell.”

Over 16,900 Australians remain unknown or unaccounted for from the Western Front campaign. Today we honour six men who have now been named. The work to do so, is one we as a country, owe these men, their families and their descendants. It is our duty to honour their duty.

For those who are still unknown, here in this cemetery we can remember them as individuals, though we don’t know where they lie.

Today, like 100 years ago, we claim these men as ours. As our sons, our fathers, our brothers, our friends, our workmates. They are ours.

We take this moment to give them the peace and respect we reserve for those we lose to death, not to say farewell but to remind ourselves of the honour, respect and above all else the love they were denied.

We also take this moment to thank the French people and in particular the village of Fromelles, for the ongoing respect they continue to show our fallen.

In those immortal words, ‘Don’t forget me cobber’.

“In places the parapet was repaired with bodies – bodies that but yesterday had housed the personality of a friend by whom we had warmed ourselves. If you had gathered the stock of a thousand butcher shops, cut it into small pieces and strewn it about, it would give you a faint conception of the shambles those trenches were.”

This is how an Australian soldier described the land we stand on today — one hundred years ago.

The stock of a thousand butcher shops.

The darkest 24 hours in Australia’s history.

Here, a world away from a newly federated nation, over 1,900 of our nation’s sons charged out of trenches to their death.

They would become the butchered meat.

They would be part of the over 5,500 Australian casualties that day, all in the end, for not a single inch of ground.

As a nation we have never seen a battle, a natural disaster or a catastrophe take so many Australian lives in a single day.

It had been meant as a distraction from the main offensive across the Somme, an attempt to put fresh Australian recruits to use by pinning down the German reinforcements.

Many of the men here, they would become known as the “fair dinkums”, had never experienced war, having enlisted too late to experience Gallipoli.

But here, as one soldier bluntly put it, “they received their full education in one day.”

Industrial warfare on a scale unimaginable, an enemy well entrenched and seasoned by two years of fighting on this very ground, and orders that simply ignored the facts.

The commander of the 15th Brigade, Brigadier General Harold Elliot, was known for his plain speaking. He did not hold back in his confronting language, describing the event as a “tactical abortion”.

He had advocated that the operation be abandoned.

Taking one member of the General Staff out in to no man’s land, he showed him part of the German defences – an emplacement called Sugar Loaf.

A fortified concrete structure that rose out of the open terrain.

If his men were to reach Sugar Loaf, they would have to cross 400 yards without cover and in full view of the German machine guns.

The officer admitted to Elliot that if the attack went as planned it would be “a bloody holocaust”. Elliot pleaded for him to have the plans changed. They were merely delayed.

On the 19th of July, it began with the shelling of the German lines. They pounded them for seven hours, hoping forlornly to weaken the enemy for the Australian attack.

Putting on a brave face, Elliot told his men, “Boys, you won’t find a German when you get there.”

At around 5:30 the shelling stopped. In the evening summer light the Australians rose out of the trenches. They charged without flinching, resolved in their duty and died.

Private Walter Downing described the carnage: “The air was thick with bullets, swishing in a flat lattice of death … The bullets skimmed low, from knee to groin, riddling tumbling bodies before they touched the ground.”

The Australians did not turn back. Downing wrote: “The survivors spread across the front kept the line straight. There was no hesitation, no recoil, no dropping of the unwounded into shell holes … still the line kept on.”

The day after, many fought bravely to make it back to safety. Many were surrounded in pockets of resistance and captured.

The dead were so many that recovering them was a monumental task, which took three days and as we learn again today was never completed.

Elliot stood to watch his returned brigade as they came back through the lines. Tears in his eyes, he yelled to one Captain: “Good God Bill, what’s happened to my brigade?”

Elliot’s Brigade would account for one third of the Australian dead.

He took the loss hard. He would later become another casualty — taking his own life after struggling to adapt to his return to Australia.

A generation of men from many nations were destroyed by the Western Front. For Australia it destroyed many here in an instant.

Given the butchery, it would be easy to push the tragedy out of our memories, to put it behind us and forget.

But Fromelles must be remembered. Not just as a tragedy but as an example of bravery and resolve that we cannot possibly imagine today.

The men who fought and died here came half way across the world to this place without any hope of knowing what awaited them.

On the command of their country and for their love of it, they fought and died without recoil.

The men who Australia lost on its darkest day; fathers, sons, brothers, uncles and cousins who never came home.

Though time may have dimmed the memories of these men, we rightly recognise and remember today their duty.

Amidst the tragedy of Fromelles we commemorate their actions.

They did not grow old due to the human butchery that occurred here 100 years ago today.

But we who are left rightly remember them, their unbridled courage, their resolve, their sacrifice.

Centenary of Anzac commemorations on the Western Front will conclude with a commemorative service for the Battle of Pozières on 23 July..

A Headstone Dedication ceremony was included during the service at Fromelles, for six Australian soldiers who were recently identified through DNA testing by the Australian Army’s Unrecovered War Casualties Fromelles project team.

The soldiers recently identified are… 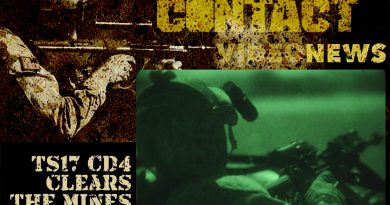