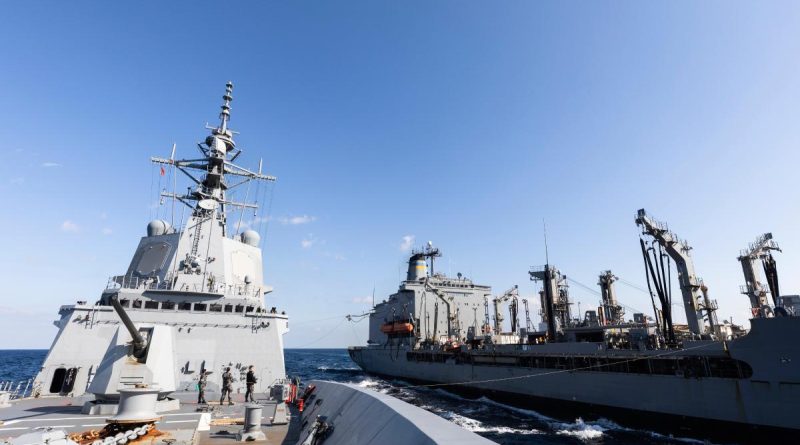 In a slick display of navy-to-navy cooperation and coordination, HMAS Hobart refuelled at sea in early November while sailing with US Navy Ship Rappahannock off Honshu, Japan.

Hobart took on 160,000 litres of marine diesel from the fleet replenishment oiler during Exercise Keen Sword, which included ships and aircraft from Japan, the United States, Australia, Canada and the UK.

Hobart marine engineer officer Lieutenant Commander Clare Randall said it was the current crew’s first replenishment at sea (RAS) with a US unit.

“So far this year we have only had the opportunity to receive fuel from Australian units,” Lieutenant Commander Randall said.

Rappahannock transferred fuel via a hose on its starboard side while simultaneously providing fuel to Royal Canadian Navy frigate HMCS Vancouver on the port side.

The RAS with Rappahannock began with some precision shooting by Seaman Boatswains Mate Brayden Kennedy, who shot a line to the oiler with a modified F88 Austeyr rifle.

“Seeing the line-throwing projectile reach the receiving ship is a very satisfying feeling, to know that you have done your job correctly and safely,” Seaman Kennedy said.

As thousands of litres of fuel passed between the ships, Able Seaman Marine Technician Samara Tracey provided live updates to the ship’s fuelling officer, who controlled the rate of flow into storage tanks.

Able Seaman Tracey said it was “rewarding and interesting” to work with a partner nation and see how they operate.

Before the ships parted, Hobart sent Rappahannock a framed photograph of the RAS and the crews exchanged waves across the water. 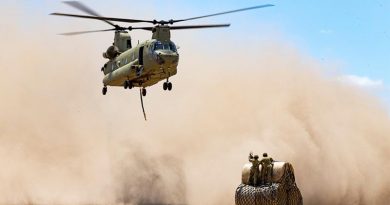