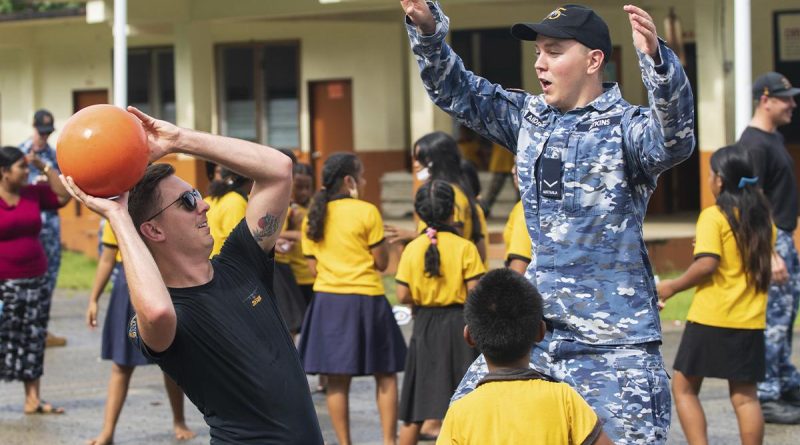 At Sokehs Roie Soledi Peidie Elementary School, the students were excited for the visit and captivated by the uniforms and Aussie accent.

Randy Lambert, the principal at Sokehs Roie Soledi Peidie Elementary School, said the students had seen the Royal Australian Air Force (RAAF) C-27J Spartan fly over the island and were intrigued as to who might be flying it.

“I am so grateful you could visit our school. It means so much to us, particularly the students,” Mr Lambert said.

“You can see in their faces how much joy this has brought them and I know they will remember this day for a long time to come.”

RAAF Chaplain Tim Mannix, who joined the Air Force in 2017, said the hospitality shown by the islanders was heartwarming.

“The locals have welcomed me into their community and their churches. I have been overwhelmed with the hospitality and kindness shown towards not only me but the whole ADF contingent deployed on Operation Solania,” Chaplain Mannix said.

Visiting a number of churches on the island and with a shared interest in religion, Chaplain Mannix was invited by the Minister of the United Churches of Christ Pohnpei to attend a Sunday service and address parishioners, an opportunity he snapped up.

“I have been out and about engaging with local ministers and priests and, although we may have different religions, our roles remain the same: to counsel, support and provide pastoral care to all.

“This being my first overseas deployment since enlisting in the ADF, I feel grateful to provide that support to not only our deployed personnel, but our Pacific Island family,” Chaplain Mannix said.