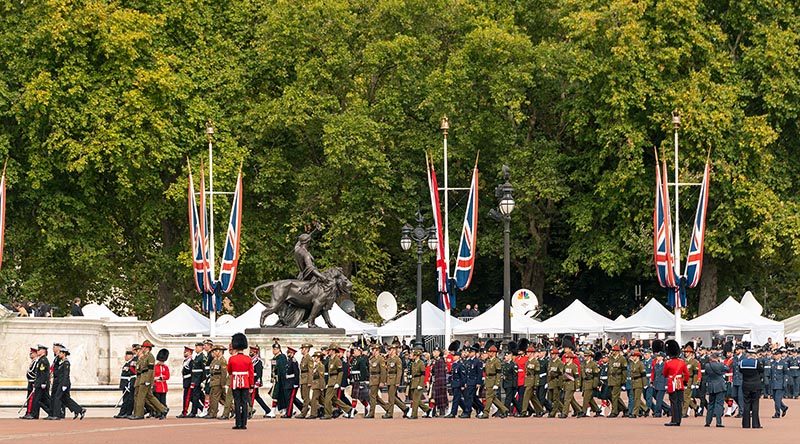 Australian and New Zealand Defence Force personnel have completed their farewell to Her Majesty Queen Elizabeth II in London overnight, joining with Commonwealth comrades to march in her funeral procession past Buckingham Palace.

The main body of the Commonwealth contingent – 24 New Zealanders, 64 Canadians and 28 Australians – were part of a 1600-strong procession slow marching at 75 paces a minute down the Mall and on to Wellington Arch in front of thousands of spectators and millions of viewers around the world.

Further down the procession were the Defence Advisers to the United Kingdom and four New Zealand Colonels Commandant, ceremonial representatives for the four NZ Army regiments attending.

At around 1am on Monday the contingents was bussed to Wellington Barracks beside St James’s Park in London, joining with UK Armed Forces to prepare for the march.

For many in the contingent, the moment of rounding the corner near the top of the Mall, and looking down a broad thoroughfare lined with flags, was a powerful moment.

RNZAF Leading Aircraftman Laurelie Giles said she felt a surge of energy when she got to that point.

“You could feel this empathy coming from the crowd. They knew why we were there – to support the Queen,” she said.

Gunner Reagen Powell, from the New Zealand Army’s 16th Field Regiment, said while death affects everyone, to see so many people feeling that way, all at the same time, was a sombre realisation.

For others, it was the moment standing to attention at Wellington Arch, when the Queen’s coffin was transferred from a gun carriage to the Royal hearse.

“We had been standing at attention, and it was hot, and then it was that moment that sent shivers down my spine.

“It was indescribable, and it was then I knew it was all worth it.”

“I had a perfect view out of my left eye of her being transferred, and I had full visibility until she left.

“I probably had the best seat in the world to watch her depart.”

As they marched back to Wellington Barracks, the crowd clapped them.

“That really hit me, after it was all over,” Lieutenant Colonel Gerling said.

“The crowd clapping and thanking us – it really tugged at the heart strings and you knew it was all worth it.”

The sailors, soldiers and aviators had arrived in the United Kingdom a week earlier and got straight into rehearsals at Pirbirght Camp in Surrey.

In the early hours of Thursday morning (UK time) they were part of a full dress rehearsal with UK Armed Forces on the Mall.

A highlight of the week was the visit to Pirbright by the Prince and Princess of Wales on Friday, to thank the Commonwealth contingents for coming this far.

The New Zealand contingent returned the thanks by performing the Defence Force haka.

The New Zealand Defence Force contingent will depart the United Kingdom for home on Friday. 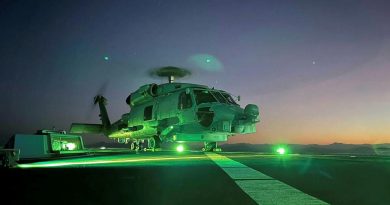