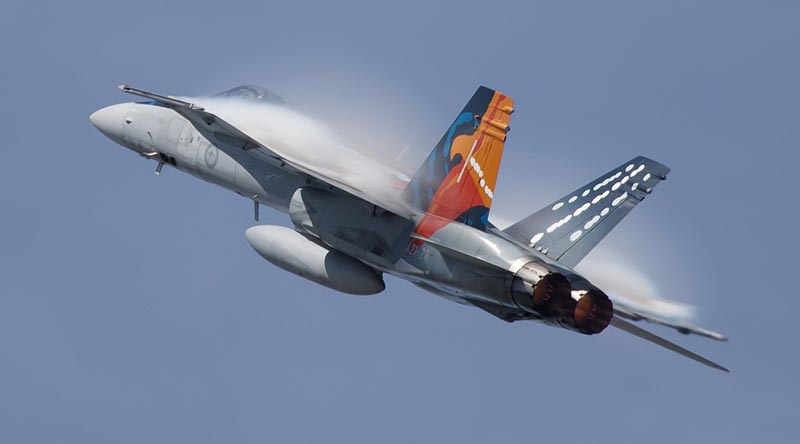 The historic F/A-18 Hornet A21-023, known as the Worimi Hornet, is now on permanent display at the Williamtown Aviation Heritage Centre. 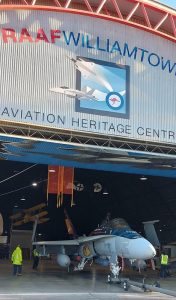 CAPTIONS: The Royal Australian Air Force F/A-18A ‘Worimi’ Hornet conducts a handling display for its final flight before retirement in December 2020 at RAAF Base Williamtown (above) and entering its permanent new home (right). Above photo by Corporal Craig Barrett – right by WOFF Paul Clarke. Story by Flight Lieutenant Karyn Markwell.

The aircraft deployed on Operations Bastille and Falconer in 2003, flying approximately 150 hours on 30 combat missions and delivering ordnance on at least seven of those missions.

On 12 April 2003, it took part in providing the first close air support for Australian land forces (the Special Air Services Regiment) since Australia’s participation in the Vietnam War ended in January 1973.

In February 2015, the aircraft was unveiled with Balarinji artwork at the Australian International Airshow at Avalon by then Chief of Air Force Air Marshal Geoff Brown.

The Worimi people are the traditional owners of the land on which RAAF Base Williamtown stands and the livery acknowledges the Indigenous people who have served in the ADF.

“A21-023 is an iconic aircraft for both its distinguished service history and its artwork, and I know it’s going to be a much-loved attraction,” Wing Commander New said.