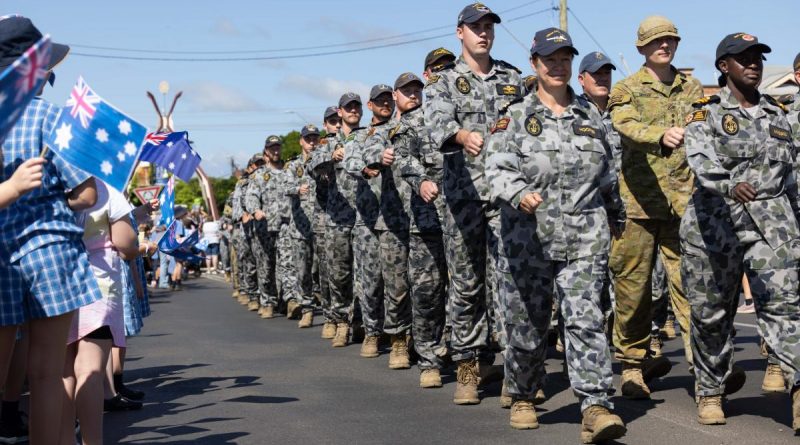 Residents of the Shire of Richmond Valley, affected by the worst floods in living history, came out in force on April 2 to thank Australian Defence Force personnel for their assistance.

Richmond Valley Mayor Councillor Robert Mustow said the parade, in which more than 750 ADF personnel marched through Casino’s streets, gave residents of the region an opportunity to thank the ADF “for the enormous role” it had played in assisting the Richmond Valley community to get back on its feet.

The thank-you had a two-way effect: lifting the community and the spirits of the ADF personnel.

Australian Army soldiers and Royal Australian Navy sailors marched down Casino’s streets to the beat of Australian Army Band musicians and the applause of the 1000-plus crowd. The parade was completed by a convoy of Bushmaster protected mobility vehicles.

“We are truly grateful to the ADF for the work they have done across the many towns in the Richmond Valley Shire,” Councillor Mustow said.

“We would not be where we are now in our recovery process without the ADF working alongside our emergency services.

“We thank all the services, all the volunteers, and every single person who has contributed to our recovery – seeing the ADF uniforms lifted the spirits in these communities.”

The soldiers and sailors who marched in the parade remain in the region to assist the SES with flood recovery.

More than 3000 ADF personnel are deployed across northern NSW on Operation Flood Assist 2022 helping communities recover from the floods.