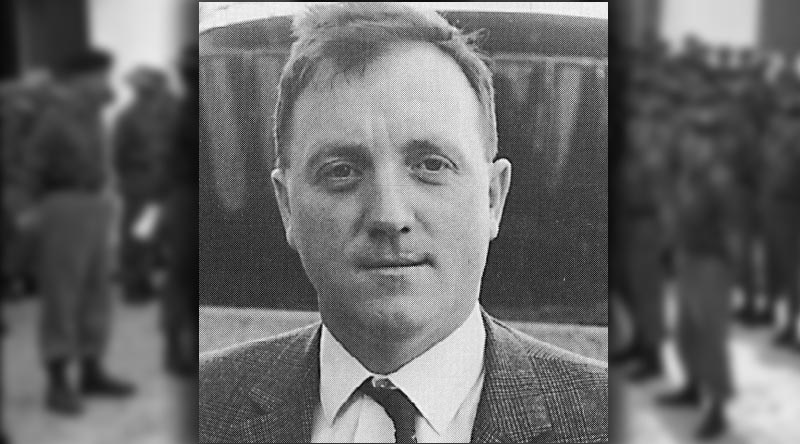 In the mist of time, Jock’s fond familiar image reaches out
Fleeting frames of determination, duty and a heart so stout
Forever, will be the sweet and glorious memories
Of his brotherhood, dash, daring and familiar cries of “follow me”

A proud history of brave deeds with his signature clearly seen
Of battle discipline where ever he had been
Yet in barracks, his voice, always strident and strong
So often heard defending soldiers who had been wronged

Now he is travelling to join his old column so far away
Where familiar laughter and song can be heard night and day
A camp with sentries alert for military ghosts leaving Aussie shores
A challenge “who goes there?” and JJ is with old comrades once more

“Major Jock Smith was a proven, strong and fearless leader. It was not only the foe on the battlefield that experienced his wrath. Canberra suits were known to dive for cover, during many of his crusades seeking a fair go for soldiers under his command. Jock was a true blue cobber and dear comrade in arms” – George Mansford

In 1965, the UK’s Territorial Army’s ‘Ever Readies’ were mobilised to serve in Aden.
Jock Smith, a platoon commander in A Company, 5th Battalion, the Middlesex Regiment, based at Hornsey, North London was one of these and was awarded the Military Cross for actions under fire.

On 6 July 1965, Lt. Smith, who was commanding the Piccadilly piquet, manned by 3 Platoon, A Company, 1 Royal Sussex, led an ambush patrol towards the top of the steep rise known as Ludgate Hill. The ambush was in fact sited to intercept dissidents moving along the track leading up from the Wadi Taim; however at 21.20 hours a small party of dissidents were observed coming along the top of the escarpment past the ambush positions. Lieutenant Smith quietly redeployed his ambush and opened fire on the party of dissidents at a range of about 75 yards. Two of the dissidents were seen to fall whilst the remainder scattered and returned the fire of the patrol wounding one of its members.

It is considered that Lieutenant Smith, a Territorial Army Emergency Reserve Officer, who had only recently joined his battalion displayed outstanding courage and skill in circumstances that would have tested a more experienced Officer.

Shortly after his return to the UK, Jock emigrated to Australia. He was appointed to a commission in the Australian Army on 28 September 1966, and was allotted to the Royal Australian Infantry Corps. He served with the 1st Battalion, The Royal Australian Regiment, including a tour of Vietnam.

He applied for a posting with the AATTV (Austalian Army Training Team Vietnam) and subsequently won a Bar to his MC.

On 24 February 1971, Captain Smith was accompanying 711 Regional Force Company on an operation against a suspected Viet Cong Company which had infiltrated the Tin Phu Hamlet, Nghia Hanh District in Quang Ngai Province.

At this stage, the Regional Force Company was in danger of losing the initiative and was prevented by the intense enemy fire from recovering their dead and wounded.   It became apparent that the enemy force was in fact the 5th Battalion of the 21st North Vietnamese Army Regiment.

Captain’s Smith small force succeeded in approaching to within 50 metres of the headquarters position before Captain Smith was severely wounded in the left side and left leg by a grenade explosion.   He continued to direct his soldiers during this battle until he was evacuated by helicopter to receive treatment to his wounds.

By his personal heroism, calmness under fire and devotion to duty, Captain Smith encouraged the Regional Force Company to continue to fight.  As a result of his actions, the company killed 47 enemy, captured a large amount of enemy equipment and inflicted a resounding defeat on a numerically superior force.