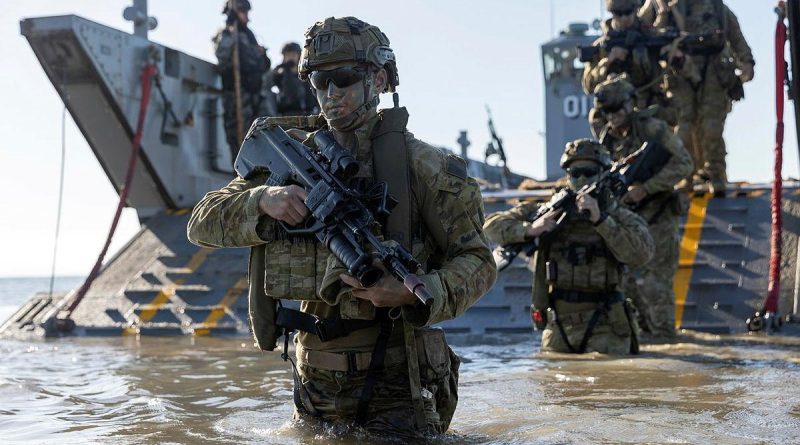 If you were fishing near Forrest Beach, Queensland, over the past month, you might have seen landing craft from HMA Ships Canberra and Choules ferrying troops to shore.

This was part of Exercise Talisman Sabre 2021.

Hidden from view, however, were the reconnaissance soldiers from the 2nd Battalion, Royal Australian Regiment (2RAR), concealed in the bush, taking notes in preparation for a joint Australian, American, United Kingdom and Japanese assault on the town of Ingham.

At dawn on July 30, the assault began with an amphibious landing.

Ingham resident Garry Fresser sat on a beach chair and watched the silhouetted boats approach the shore against the rising sun.

“Everyone’s sitting doing nothing all the time and then, all of a sudden, something like this happens. It’s almost exciting,” he said.

The Joint Pre-Landing Force had been surveying the beach for days, marking the shoreline with red, blue and green lights in advance of the boats carrying soldiers and their large vehicles to shore.

Marine Matthew Owen, a Royal Marines Commando, was in the first wave of the assault, having spent weeks in HMAS Canberra.

“The landing craft were different to ours,” Marine Owen said.

“It was pretty deep when we got off, though back home they would probably drop us out further.”

Lines of soldiers departed the beach and moved on foot towards the Ingham airfield – their final objective some 20km away – while armoured personnel carriers took a faster route along the road. Australia, the US and other partner forces used TS21 to strengthen their cooperative military-to-military relationships through the planning and conduct of realistic warfare scenarios across both conventional and cutting-edge battlefields.

The beach landing and assault were some of the final activities for TS21 and certified forces in amphibious operations, according to the Commander of Deployable Joint Force Headquarters, Major General Jake Ellwood.

“These types of skills don’t come easily, they take a lot of training to make sure that our people are highly capable,” Major General Ellwood said.

“You can’t take for granted that you can just do it on the fly; it’s something that must be worked at.” US Marine Corps Colonel Jeffrey Rule, a US amphibious specialist at the Deployable Joint Force Headquarters, said amphibious operations were “the hardest” to conduct in the military, and even more so when working in a coalition.

“Even when you speak the same language, the cultural differences can be huge, but the only thing harder than that would be working without a coalition,” Colonel Rule said.

“That’s the nature of friendship, and that’s what friends do for each other,” he said.