Townsville, Queensland – just as the last rays of light had retreated from the dry riverbed, a low rumble began to echo across the darkened landscape.

The rumble grew to a roar as three U.S. Marine Corps MV-22B Ospreys, an American multi-mission tiltrotor military aircraft with both vertical and short takeoff and landing capabilities, descended out of the dark sky and onto a landing zone several kilometers west of their primary objective.

The Osprey’s massive rotating propellers tilted skyways as they slowed to a hover before descending onto the dusty terrain below.

Under the full moon, the green, disk-like glow of the rotor lights were further illuminated by the sparks of static electricity and sand whipped up by the spinning blades.

Then, as quickly as the Ospreys appeared, they were gone.

In place of the Ospreys were 150 U.S. Marines assigned to Marine Rotational Force-Darwin (MRF-D). Heavily-armed, loaded with equipment and prepared to launch a ground assault on their primary objective – a critical airfield west of the quiet beach town of Bowen, Queensland.

The overnight assault on Bowen airfield was an important part of TS21, the ninth iteration of the largest training exercise between Australian and U.S. military forces. It is a key training opportunity that supports the advancement of a free and open Indo-Pacific by strengthening relationships, building trust and interoperability among ally and partner nation militaries.

“I love working with the Australians. Their tactics are very similar to ours and we work great together,” said Raper. “We had a chance to try each other’s weapons and swap kit, and it’s been great to learn from each other.”

The Marine rotational force out of Darwin is a portion of the larger U.S. force participating in this year’s Talisman Sabre. U.S. forces from the Army, Navy, Marines and Air Force are all taking part this year.

“Realistic exercises like Talisman Sabre provide effective and intense training to ensure our forces are capable, interoperable and combat-ready.” 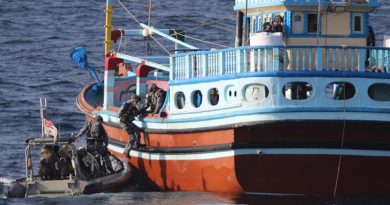