And, I would really like to start printing again as early as issue number 61 on 1 March next year (exactly five years after we stopped printing).

But here’s the catch – I cannot afford to gamble on this – I can only do this if the audience support is already behind me. And I don’t mean emails or messages of support. I mean cold hard cash. I need ‘subscribers’ to sign up.

Let me back up a bit. Patreon is a go-fund-me-type platform for creators, where I launched the CONTACT Patron Army about nine months ago, promising to start printing CONTACT magazine again if I reached my ultimate goal of a basic wage for me plus printing costs.

However, at current ‘recruitment levels’ and projections, we’ll be lucky to get to that point somewhere around issue number 116 in 2032!

One of the key problems with CONTACT Patron Army recruiting up to now was, I felt very awkward about promoting it – because it was designed in the first instance to secure that basic wage for me.

So I had an epiphany this month along the lines – why don’t I drop the basic-wage-first BS and just aim for printing costs. That way the target would be much smaller – AND, I won’t feel so awkward about promoting the shit out of this new idea.

So, the new target is $4000/month – less than half what it was initially. That’s enough to cover printing etc. And, if it works, potential profit from extra shop sales will pay me the wage I need – just like a real business!

I have also slightly re-adjusted some of the ‘ranks’ in the CONTACT Patron Army – e.g.‘private’ is now US$2.50 per month – and all CONTACT Patrons will be considered subscribers, receiving a ‘free’ copy of the magazine, in print, delivered by mail four times per year.

This is the essence of my new plan. I WILL DO IT when Patreon pledges reach $4000/month. And, if that happens before 10 January (decision deadline, because I need four weeks extra production time for a printed magazine), then I WILL PRINT issue 61 for distribution on 1 March next year.

If it takes longer to reach this new half-sized target, then getting back to printing will take longer too – and so be it.

So, if you really, truly want to see issue 61 printed on paper as much as I do and you are not already a member of the CONTACT Patron Army, then please show your support by signing up as a patron/subscriber before 10 January and help me to make this happen.

It will cost you as little as US$2.50/month (unless you volunteer for a higher rank, with extra benefits). That’s just $3.40 Aussie at recent exchange rates, which could see Australia’s best boots-on-the-ground military magazine printed and delivered into your sweaty little palms as early as 1 March next year!!!!

Your mission, should you choose to accept it, is to help me reach that target by 10 January, so that the next printed issue of CONTACT will be 1 March next year.

Thanking you in anticipation. 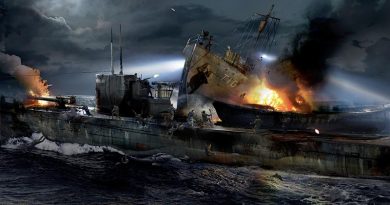 75 years since only Japanese code books of WWII captured