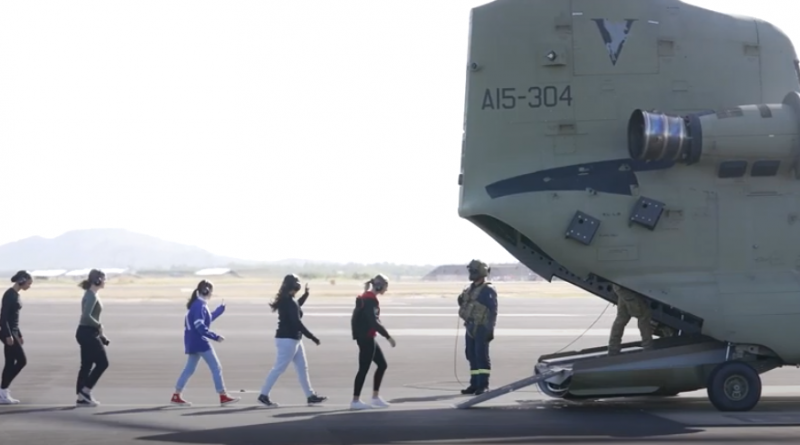 There was excitement on the faces of 10 Defence Force Recruiting candidates as they walked through the hot exhaust and into the rear of a CH-47F Chinook helicopter for a flight over Townsville.

It was part of an immersion activity for women interested in experiencing air and ground roles with 5th Aviation Regiment at RAAF Base Townsville on 25 May.

Accompanied by the Specialist Recruiting Team – Women, the candidates, all considering aviation careers in the Australian Army, were treated to a “once-in-a-lifetime” insight into aviation roles in Defence.

“Candidates were able to see the facilities and meet members of the regiment, as well as speak with Australian Defence Force Recruiting about joining Defence.”

“It was awesome and very inspiring. I mean, one ride on that and I’m like ‘sign me up,’” Ms Marsh said.

Interested in joining as a pilot, candidate Piper James said the activity has given her a better understanding of what the job entails.

“It’s overwhelming sitting in the seat, seeing all the buttons and controls, and after talking to [the aircrew] – they’ve opened up my eyes,” Miss James said.

“Explaining how everything works and what they get to do day-to-day, makes me want to join now.”

Candidate Summer O’Donnelly said “the flight was the best part of the visit.”

“Seeing what they see when they go up was pretty insane,” Miss O’Donnelly said.

“Before today I didn’t know about all the jobs, so having them explain what they do was interesting.

“You can see what they do on social media, but this way they could tell us in person.”

As one of the biggest challenges for candidates is fitness, one-on-one mentoring is offered at recruiting centres throughout Australia.

“To help them reach the standards, we also have eight-week fitness programs at commercial gyms.”

In Flight Lieutenant Rowlandson’s 17 years of service, she has seen Defence towards become more inclusive and flexible, particularly in the employment of women.

“Defence is so exciting and unique, and it’s a job for life,” she said.