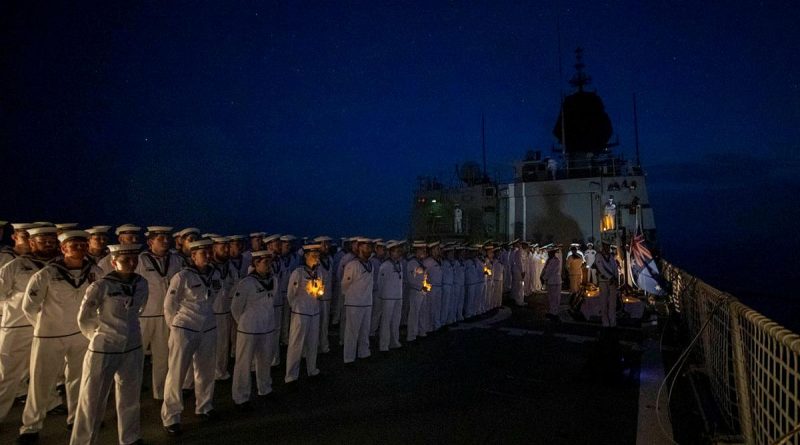 HMAS Anzac has held a Dawn Service in the South China Sea to commemorate Anzac Day.

The ship, currently on a regional deployment in South East Asia, paused to allow ship’s company to mark the landing of Australian and New Zealand troops on the Gallipoli peninsula on 25 April 1915.

The formal ceremony included a laying of wreaths and the singing of the Australian national anthem by Leading Seaman Electronics Technician Imogen Reiri.

HMAS Anzac Operations Officer Liam McMahon played The Last Post on bugle before a minute’s silence to honour the service of men and women who have died in all conflicts.

Commander Officer Anzac Brendan Horn said the service was held to uphold the Anzac spirit while the ship continued to serve Australia’s national interests at sea.

In his dawn service address, Commander Horn said it was a memorable moment for ship’s company to spend Anzac Day on HMAS Anzac.

“Spending Anzac Day at sea is special and even more significant onboard HMAS Anzac. I can feel a real sense of mate-ship and I can also feel the support from our family and friends back home,” he said.

Sub Lieutenant Ready noted that the shared bond between Australia and New Zealand had started on the beaches of Gallipoli and continues today.

“Today, as we remember all those who have served in the Royal Australian Navy, and Te Taua Moana o Aotearoa, we carry with us the mana and the spirit of the Anzacs.” she said.

Following the Anzac Day ceremony, Anzac will continue the regional deployment before returning to her home port in Western Australia in May. 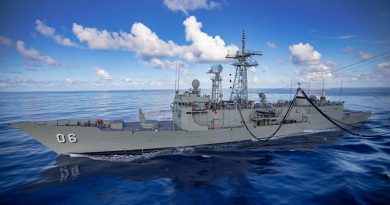 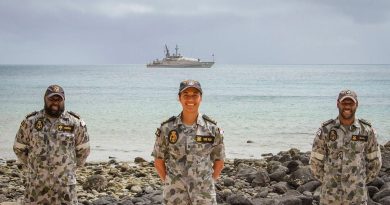