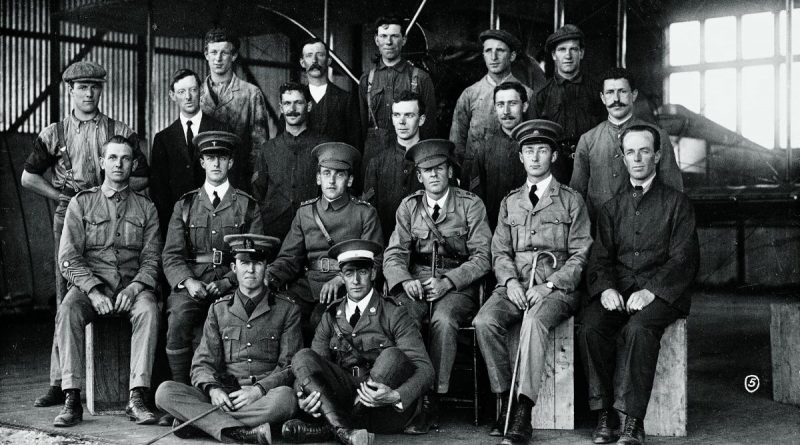 This year, Air Force marked its centenary, but the service was born in the Army and had a baptism of fire during World War I.

When Britain created the Royal Flying Corps in April 1912, with a military aviation corps, and naval wing (later the Royal Naval Air Service), the Australian Army was already recruiting ‘mechanists and aviators’ for a Central Flying School.

By March, 1914, and with five aircraft purchased from Britain, test-flying began at Point Cook.

Captain Henry Petre and Lieutenant Eric Harrison were selected as instructors, together with four mechanics, Chester, Fonteneau, Heath and Shortland, and appointed to the new Central Flying School (CFS).

By July, No. 1 Flight of the Australian Flying Corps (AFC) was ready to commence flying training.

The outbreak of war in August, 1914, meant the existence of the new flying training school at Point Cook made it possible to contemplate the reality of air operations.

The first Australian soldier under instruction was Lieutenant George Merz.

On February 8, 1915, the Australian Government received a request from the Viceroy of India seeking aviators, aeroplanes and motor transport to help in a campaign in the Tigris Valley against the Turks.

An agreement was reached and a half flight was placed at the disposal of the Government of India, with men and motor transport departing Melbourne in April 1915.

On May 31, 1915, Captain Petre flew the AFC’s first operational flight when he conducted reconnaissance over Turkish positions at Kurna on the junction of the Euphrates and Tigris River.

With the Allied cavalry patrols skirmishing on the outskirts of Kut-el-Amarh, in eastern Iraq, Lieutenant Merz, who had been retained at Point Cook as an Instructor, arrived at Basra on June 13, 1915, to join the half fight.

By the middle of July, the half flight was providing active air support. Equipped with Maurice-Farman and Caudron G III aircraft – two-seaters fitted with 80 horse power engines. 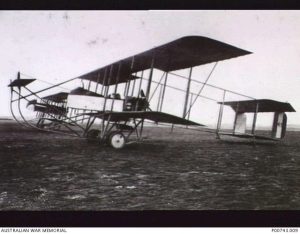 CAPTION: England, circa 1917.  Maurice Farman Longhorn aircraft No. 49 with MF Shorthorn in the background.  Photo donated to the Australian War Memorial by K. Inc. 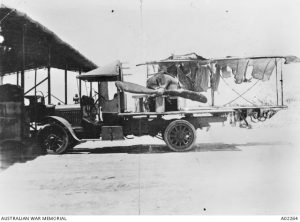 CAPTION: The remains of the Caudron G III aircraft being transported on the back of a truck, possibly a Model T Ford truck, which was flown by Lieutenant G P Merz of the Australian Flying Corps, after it had been hacked by hostile Arabs during a forced landing. Merz and his observer, Lieutenant W Burn were killed during the attack. Photo by Australian War Memorial.

These French-designed biplanes were only safe to fly after 1000 hours and in the cooler air at 6000 feet, notwithstanding the danger of their engines severely overheating when attempting to reach altitude.

On July 23, Lieutenant Merz and his observer, Lieutenant William Burn (New Zealand Army), arrived at the British lines outside Nasiriyah in time for an attack the next day.

Departing at dawn on the July 24, their observation of enemy movements enabled the infantry to storm the weaker defences, and Lieutenant Merz witnessed the consequent Turkish retreat from the air.

Diving again through a fusillade of rifle fire, Lieutenant Merz dropped his two-pounders from less than 20 feet.

Returning exhausted that night, rather than relax in the mess tent, Lieutenant Merz, a graduate of medicine from the University of Melbourne, honoured his allegiance to the Hippocratic Oath by helping the understaffed medical personnel in the hospital tent care for the many causalities of that day’s fighting.

The next day, Lieutenant Merz and Lieutenant Burn went missing on operations near Abu Salibig – Australia and New Zealand’s first causalities of the air war.

They did not die in vain – their air reconnaissance justified a more confident advance on Kut and pilots were issued with rifles.

In all, four AFC squadrons served with the British during World War. I,

Of these, No. 1 Squadron flew against the Turks and Germans in the Middle East while Nos. 2, 3 and 4 Squadrons served on the Western Front between September 1917 and the Armistice.

On the Western Front, the AFC was possibly the last Australian formation to go into action when Nos. 2 and 4 Squadrons took to the air November 10, 1918.

Enemy trains were bombed and troops strafed along the roads as they retreated back through Belgium towards the borders of Germany.

The AFC was disbanded at the end of the 1919, while the CFS continued to operate until 1920 when the Australian Air Corps (AAC) was formed.

The following year, on March 31, 1921, the AAC was separated from the Army to form the Australian Air Force.

Following an endorsement by King George V in June, 1921, the prefix ‘Royal’ was approved and came into effect on August 31, 1921.