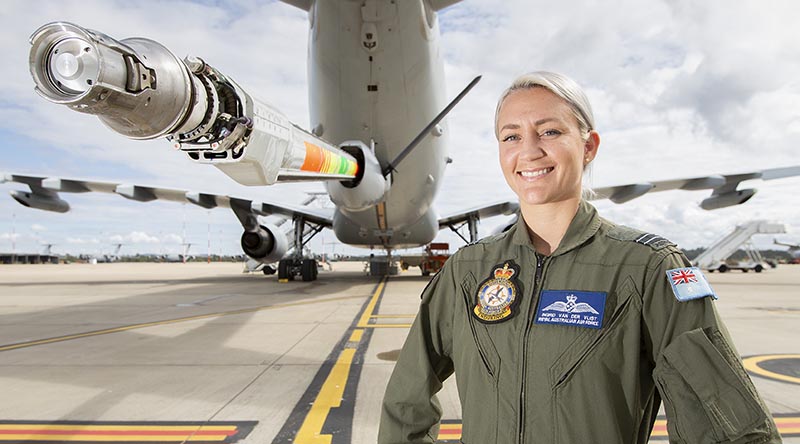 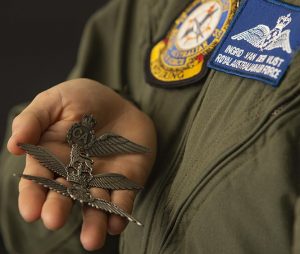 In her current role Flight Lieutenant Van Der Vlist controls the air-to-air refuelling hoses and boom on the in-air refuelling tanker during flights.

Her new qualification puts her in a cohort of fewer than 20 air refuelling operators in the Royal Australian Air Force.

She then transferred to the Army, qualifying as a helicopter pilot – double-wing badge.

And recently returned to the RAAF, collecting her third aircrew badge.

All aircrew in the Royal Australian Navy wear a double-wing badge with officer badges sporting a royal crown on the central element – the crown missing from NCO badges.

Wikipedia says aircrew wing badges are commonly referred to as brevets – but this is technically incorrect because brevet is French for diploma or certificate.

EDITOR’S NOTE: The initial version of this story referred to Flight Lieutenant Ingrid Van Der Vlist having ‘seven wings’. This was a ‘deliberate error’ 😉 which we fixed after Jess (in comments below) pulled us up on it. We have offered Jess a prize for picking our clever ‘deliberate error’. More than 1500 people viewed the story before Jess corrected our late-night, whiskey-affected carelessness 🙂
Mea culpa – using the ‘royal we’ above 😉 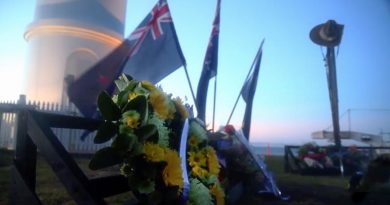 10 thoughts on “Meet the RAAFie with five wings”