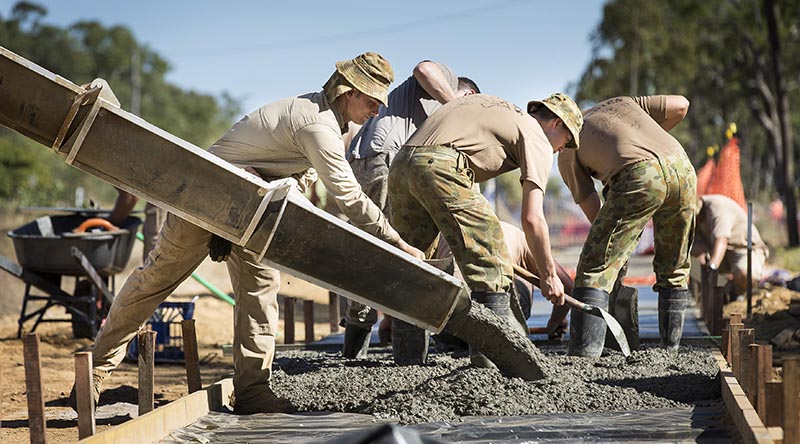 This exclusive by Lanai Scarr writes / quotes you several times throughout the article, emphasizing your commitment to the employment of Australia’s young both here in WA and across the country.

The feeling of your forceful and unrelenting approach is very clearly conveyed in the article. It really does sound like you can and will make a difference.

So before I put my questions to you in regard to the newspaper article and your work so far, I wish to explain my interest in this topic.

I am the spokesperson for a group of Ex-service persons, who predominately came through the Army Apprentices School system during the 50’s to the 90’s, together with other Ex-Service members of the AAA School Association, Royal Australian Engineers Association of WA, Royal Australian Signal Association (WA Branch), Australian Army Cadet Brigade WA, retired former Program Manager Building Studies Leederville Technical College, and members of Perth Legacy.

On the WHOLE there is only ONE avenue to Training and Certification of Qualified Tradespeople who have completed an Apprenticeship and that is the TAFE.

The following is an extract from correspondence we have previously sent to some people and Government Departments including: Defence West via Peter Tinley MLA (Minister for Veterans Issues) and Paul Papallia MLA (Minister for Defence Issues), Mr Ray Sputore member of the State Training Board (Department of Training and Workforce Development), the Governor Kim Beazley and Mrs Gina Rinehart (Hancock Prospecting Pty Ltd).

Apprenticeship training in Western Australia (as for most states), is in our opinion appalling. The TAFE system is not working, is top heavy and does not address the needs of today, in dealing with and training teenagers and young adults.

We believe the existing TAFE system is not capable in many ways. Briefly these inadequacies include:

Our group is proposing a simple look back in history to see what this country once had and try and emulate that within the constraints of today’s view of handling young people (eg: 15 year olds cannot be Soldiers as we were).

Therefore we are proposing that such a school could be run under the banner of the Australian Army Cadet Brigade and for the point of discussion this proposed college/school could be called, Army Cadet Apprentice School.

The proposal is that we embrace and develop the idea of a High School System that is foremost based on military type rules, principals, discipline, and dedication and above else personal pride and discipline.

And within that military style high school, hopefully assisting to help address some of the perennial problems with today’s teenagers and young adults. Such as:

The following are quotes, statements and the like from the newspaper article, together with my views or questions:

To vow is ‘a solemn promise/resolve to exact a result’

Could it please be known who those companies were and their representative with whom these discussions were with?

This seems a poultry amount of money from the peak body from which great numbers of jobs are going to be available. It would appear they are not on board with your expectations.

These are just words, how are you going to get the mining / resource industry to really act.

And once you have knocked on their door, what?

This is a staggering statement; if you had said 10,000 it still would have been incredible. Can you please show Australia how this is going to be achieved? Our existing Apprenticeship Training system does not have the capacity to pump out more Tradespeople

The Minister for Defence Linda Reynolds wants more Indigenous people in the ADF. It would make sense to collaborate with her to set up an Army Cadet Apprentices School solely for Indigenous teenagers and young adults in both the Pilbara and Kimberley regions.

Shouting does not work anymore even footy coaches have given it away. Teenagers, young adults and indeed us all, need to be lead, encouraged and shown the path to these careers, jobs and employment opportunities.

With whom, where, what did you say, how was the response?

One would think a timeframe for you to implement your stated objectives in this roll, is paramount.  Surely it would include scheduled interstate trips.

We have an opportunity with our proposal, so can we expect your contribution.

Our proposal is equally relevant and important to the Minister for Employment. If at all possible could you both visit WA together? Discussing the pro’s and cons of our proposal with you both would be enlightening and advantageous to everyone.

As we see it, if you really want to make a difference you have to come up with something new in the field of Apprenticeship and Youth Training. We believe our proposition is realistic, achievable and not hard to establish.

When you come west (please don’t leave it too long), it would be nice to meet you and tell you a lot more about our Proposal for an Army Cadet Apprentices School.

Thank for your time and we look forward to your reply.

Regarding a National Day for Veterans of MEAO

3 thoughts on “Proposal to raise an Army Cadet Apprentice School”