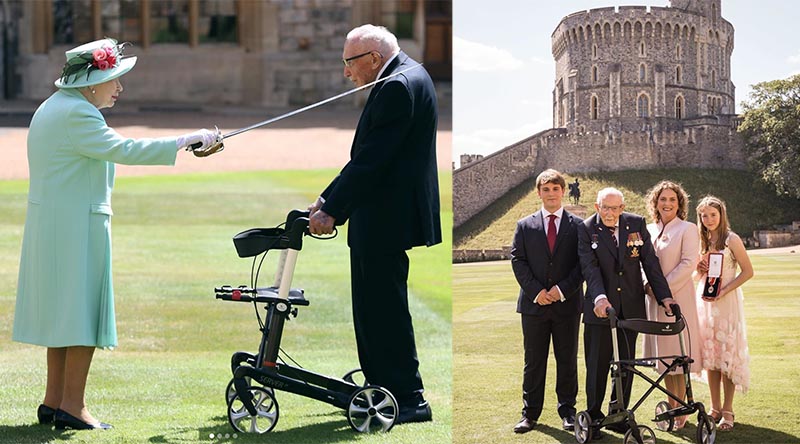 CAPTION: Queen Elizabeth confers the Honour of Knighthood on Captain Tom Moore at an investiture at Windsor Castle – and Sir Tom with proud family members after the ceremony. Photos courtesy The Royal Family.

The Queen awarded Captain Sir Tom Moore with his insignia of Knight Bachelor, after knighting him with the sword that belonged to her father, King George VI.

Captain Tom was the only person honoured during the Queen’s first official ‘public’ engagement since the start of COVID-19 lockdowns.

The knighthood was officially conferred on 20 May, but now formalised by the Queen’s hand.

The ceremony took place on the lawns of the quadrangle inside Windsor Castle on Friday.

Accompanied by his daughter and two grandkids and supported by his famous wheelie-walker, Captain Tom stood proud as the Queen dubbed him a knight by tapping him on the shoulders with her father’s sword.

“I have been overwhelmed by the many honours I have received over the past weeks, but there is simply nothing that can compare to this,” Captain Tom said via Twitter.

“I am overwhelmed with pride and joy.”

See our coverage of Captain Tom’s recent inspirational service to his country, here.