CAPTION: A pair of F-35A Lightning II fighter aircraft from RAAF Base Williamtown marry up with an KC-30A multi-role tanker transport over Taree NSW. Photo by Bill Mastrippolito from Facebook. Story by Eamon Hamilton.

Commanding Officer of No. 33 Squadron Wing Commander Sarah Stalker said skies over the area were frequently used for training.

“We’ll often use a block of airspace that extends from Williamtown to Coffs Harbour, which allows aircraft from Williamtown and Amberley to ‘meet in the middle’ when training,” Wing Commander Stalker said.

“Air-to-air refuelling is usually conducted at an altitude of 20,000 feet or more, so will often go unnoticed by the local community.”

KC-30A is a converted Airbus A330 airliner, and the RAAF operates a fleet of seven of these aircraft.

While the KC-30A’s interior is almost exactly like a normal airliner, the rest of the aircraft has been modified with systems that allow it to perform the air-to-air refuelling role.

“We can carry more than 100 tonnes of fuel and have two methods of offloading that fuel to another aircraft,” Wing Commander Stalker said.

“The receiver aircraft will need to maintain a precise formation with the tanker whilst they fly together at 600 kilometres per hour.

An air refuelling operator uses a console in the cockpit and 3D monitors to direct the refuelling process behind the aircraft.

“We conduct a lot of this training away from built-up areas, in airspace that is away from where other aircraft will be flying.

“Typically, there is no fuel that escapes during each airborne refuel, and if fuel is released, it evaporates into the atmosphere, rather than falling directly onto the ground.”

Regular training of this nature ensures the RAAF is able to respond to events at short notice and travel long distances.

The current round of air-to-air refuelling training is expected to continue high above the mid north coast of NSW until June 25. 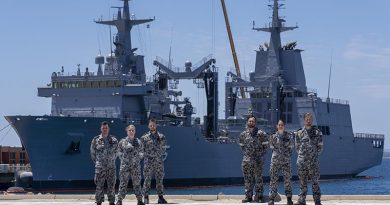