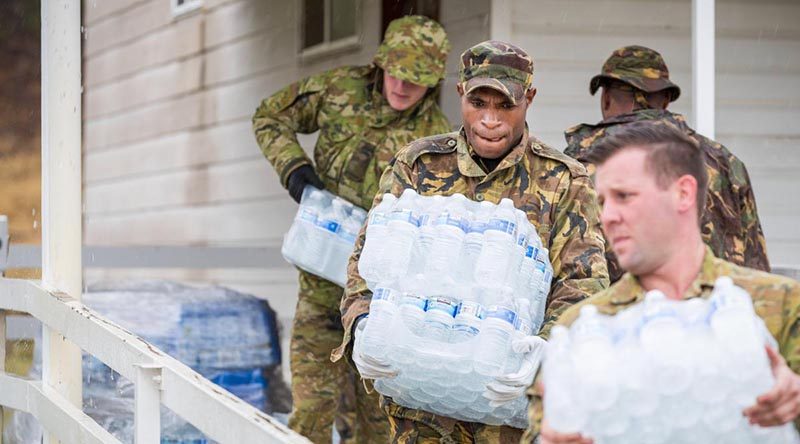 Based out of Omeo, the task group has completed jobs all over the central region, from Cobungra in the west to Buchan in the east.

They’ve also helped Bush Nursing Centres around the region by flushing and spraying out their water tanks, assisting locals with food deliveries and used their protected mobility vehicles to conduct engineer reconnaissance of roads that might be threatened by ‘killer trees’ – one of the primary concern of the Country Fire Authority.

Officer Commanding the task group Major Ben Jankalns said his soldiers had been working hard, but there was still much to do in support of the local and state authorities.

“By initial estimates, there were thousands of kilometres of roads that need to be checked and cleared across the state, which is a huge job for just the civil authorities,” Major Jankalns said.

“Anything we can do to alleviate some of that burden, especially through the use of multi-national assets, and help those agencies out is worthwhile.”

Locals in the area have become familiar with the sight of soldiers – both Australian and Papua New Guinean.

“I think everyone is really grateful for the opportunity to come here and help out in any way they can, rather than just watching it play out on television,” Major Jankalns said.

“PNGDF soldiers have integrated with their ADF counterparts really well and their easygoing attitude and strong work ethic is proving to be a real benefit to the task group.

“It’s a real pleasure to command such a diverse group of professional and highly capable soldiers from two nations.

“The communities we’ve been working in have all been really appreciative to have us here, which is really fulfilling for everyone – to know their work is valued and they’re having an impact on the lives of the Australian community.”