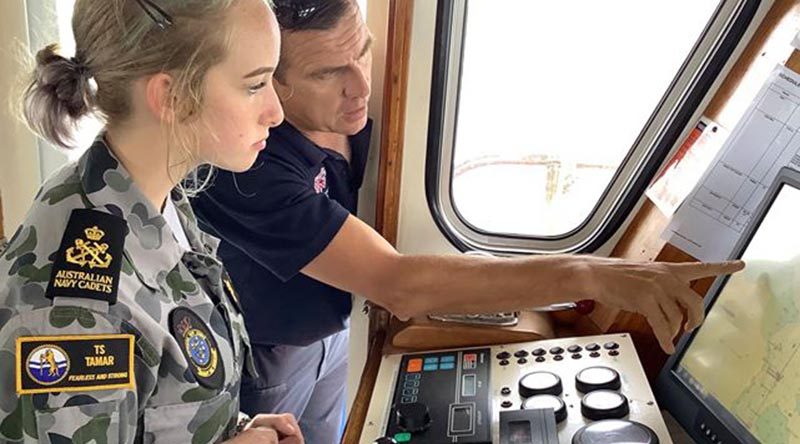 CAPTION: An Australian Navy Cadet at the helm of an Australian Maritime College training vessel during the inaugural ANC Maritime Skills Camp.

These 18 cadets were selected to pilot this activity.

This camp was focussed on survival at sea and learning about boats and engines.

On the first day of the camp, we had a chill-out session and got to know each other.

All the cadets were so supportive of each other.

21 January was the first day of activities – we got up and mustered, then all went for breakfast.

We headed off to the Seamanship Centre at Beauty Point where we went on the Reviresco (a fishing boat set up for training) for a voyage.

Some cadets got to drive the vessel and participate in emergency steering.

We also conducted a man-overboard drill.

We then went into the ‘Stephen Brown’ – an ex coal-carrying ship where we got to pull a propeller from a shaft, hand-start engines and looked at various engines including the ship’s original, which is massive.

We headed back to the AMC in Launceston where we went off to dinner, then went to the recreation area and played a few games until it was time for bed.

The next day we were on simulators and in the survival pool.

First, we went to see the tow tank and did the pasta-boat challenge.

We then came up with our solutions to logistical challenges faced by the maritime industry and Defence in support of the bushfires and what they can change to better help fire-ravaged areas.

Then we went to mini modules in ship simulators on computers where we had to figure out if we were the stand on or give way vessel and put that into effect.

One cadet had their screens put on the big screen for everyone to see.

After lunch we went to the survival pool where we received training in lifejackets and life rafts.

We got to jump from a 3-metre-high platform and then we did a survival simulation where we had to abandon ship like it was sinking, set off a life raft and enter it without panicking.

After dinner we went to the Main Bridge and Tug simulators.

We were split into groups to operate either one of two tugs or the main simulator, which had been setup as a warship.

We got to go around Sydney Harbour, but some cadets had trouble steering the tugs and crashed into the ship we were escorting.

The previous training in the mini modules helped us with our navigation and ‘rules of the road’.

On the final day, we woke up and packed our bags ready to head off to the fire-training ground in Bell Bay, Tasmania.

After our bags were packed, we went for breakfast and enjoyed our last meal at the AMC.

When we got to Bell Bay, we put on safety gear and got the safety brief.

The groups then swapped over after having a five-minute break.

The camp concluded with a BBQ lunch and we were presented certificates for completing our training.

Cadets then got changed into pirate rig for their travel home.

After some emotional goodbyes at the end of the very successful AMC camp we all headed off in the direction of home.