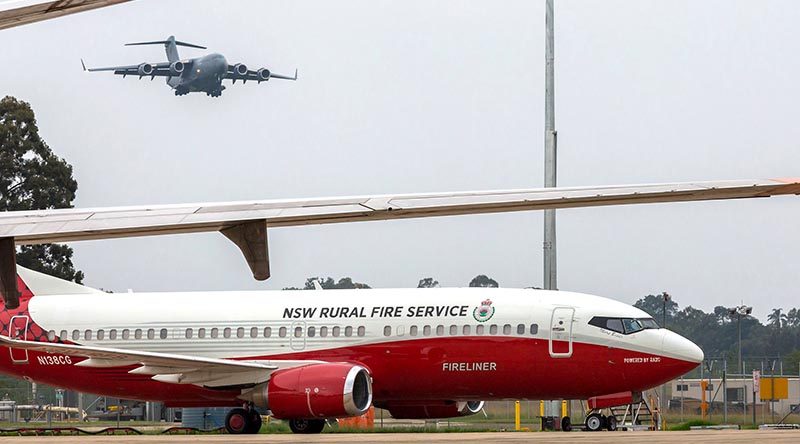 A RAAF C-17A Globemaster III collected the first 20-tonne load of critical fire retardant powder from Nellis Air Force Base, Nevada, and delivered it to RAAF Base Richmond yesterday to support state and federal emergency authorities.

A total of 117 tonnes will be delivered over four loads over the coming week as part of Operation Bushfire Assist.

Chief of Air Force Air Marshal Mel Hupfeld was thankful USAF and US stakeholders helped support the movement of retardant.

“The Australian people are comforted to know that in times of need, we have great friends like the United States who are ready to lend a hand.

“This is yet another example of the strength of our long-term friendship between our countries.”

The delivery has been timely, with the arrival of a DC-10 VLAT and a C-17A with essential VLAT spare parts into Canberra on 17 January to mark the first of four new aerial firefighting aircraft announced by the Australian government recently.

No. 1 Joint Movement Unit coordinated the many supporting organisations required to manage the complex re-supply, working with the USAF, Emergency Management Australia, Australian Border Force, the Department of Agriculture and RAAF air movement teams on the ground.

Unit commanding officer Navy Captain Fiona McNaught said she was proud of her team’s professionalism in coordinating the complex tasks.

“There was extensive international engagement and inter-agency coordination involved in the movement and delivery of the DC-10 spares and the fire retardant from the US to Australia,” Captain McNaught said.

“The professionalism and efficiency of all organisations and individuals involved was nothing short of superb.”

ADF personnel have been working with state and territory authorities since September 2019 in response to Australia’s bushfire crisis. This support will continue for as long as needed.

More than 800 Air Force personnel from about 71 units and a number of aircraft are working in support of Operation Bushfire Assist, including up to three C-27J Spartans, two C-130J Hercules, a C-17A Globemaster, a P-8A Poseidon and three B350 King Air aircraft.