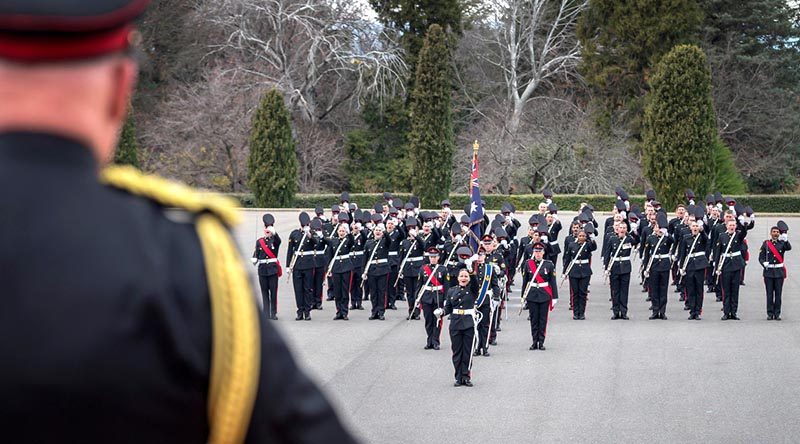 A ceremonial “Trooping of the Queen’s Colour” was conducted  by the Corps of Staff Cadets of the Royal Military College-Duntroon on Saturday.

CAPTION: Governor-General Sir Peter Cosgrove accepts three cheers for Her Majesty the Queen during his final military parade before retiring – the annual Trooping of the Queen’s Colour – at the Royal Military College – Duntroon. Photo by Leading Seaman Craig Walton.

The annual parade celebrates the birthday of Her Majesty Queen Elizabeth II, Queen of Australia, who turned 93 this year.

The Reviewing Officer for the parade was His Excellency, the Honourable Sir Peter Cosgrove, AK, MC (Retd), Governor-General of Australia – at his final military parade in uniform before retiring later this month.

“It is more than 54 years since I put on a uniform here at the Royal Military College as a Staff Cadet,” he said.

“It is to me most apt and very nostalgic to wear my uniform here for the final time as Governor-General and Commander-in-Chief as we salute Australia’s sovereign.”

Commandant of RMC-D Brigadier Rupert Hoskin said the parade was a testament to the college’s proud history as the Army’s premier officer-training establishment.

“Governor-General Cosgrove has a special connection with Duntroon, being a graduate himself then later serving as the Commandant,” Brigadier Hoskin said.

“It is a privilege for us to be able to mark this historic occasion and to pay our respects in this very special place.”

The ‘Trooping of the Colour’ ceremony dates back to the 16th Century when, each evening, the Regiment’s Colour was escorted through the ranks of troops to ensure that soldiers would be able to recognise their Colour on the battlefield.

Originally the Colour was the rally point, the focal point during the noise and confusion of battle. They provided inspiration and morale, and they are an incredibly important part of a military unit.

The Queen’s Colour was trooped for the first time at the Royal Military College-Duntroon on the Queen’s Birthday Parade in 1956.

The Staff Cadets who conducted the parade were supported by the RMC-D Band and Australia’s Federation Guard (AFG) Gun Detachment. 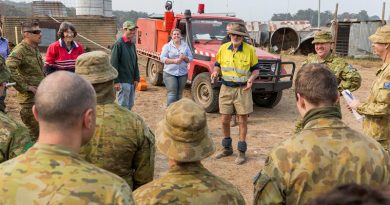