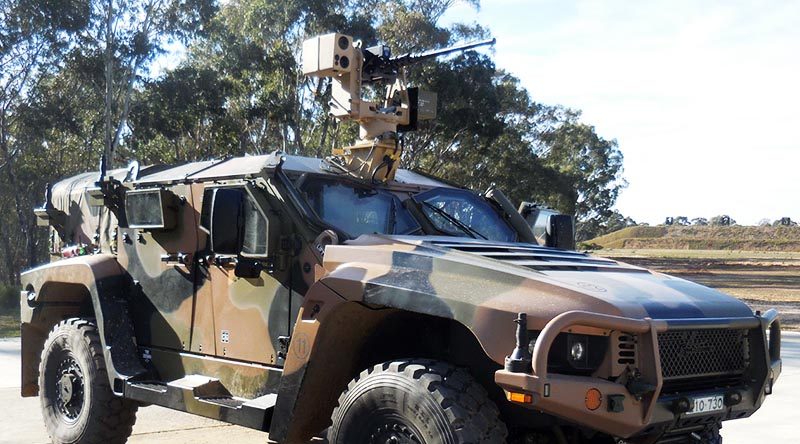 CAPTION: In July 2018 the R150 was succesfully integrated into a Hawkei and conducted live-fire stationary and moving shots. EOS photo.

R150 is a stabilised, lightweight platform for remotely mounting weapon systems on protected vehicles – and follows in the footsteps of its larger sibling, the R400.

Designed to be half the weight, the R150 has exactly the same performance characteristics as the R400 when fitted with weapons up to and including the 12.7mm machine gun.

Developed as part of a Commonwealth Priority Industry Capability Innovation Proposal to develop the next generation of sovereign remote weapon systems, the R150 has now finalised testing and is due to enter production by the end of this year.

It uses exactly the same control group and electronics, and is plug and play.

A vehicle with an R400 mounted can be replaced with and R150 in approximately 20 minutes and there is no discernible difference for the operator.

Over 1200 of the R400 have been sold world-wide and interest in the R150 is growing, with EOS having been approached by several overseas countries looking for a lighter system to provide protection for smaller armoured and logistic vehicles.

EOS is already a major defence industry exporter and the addition of the R150 has the potential to add further overseas contracts and support job growth in Australia, directly with EOS and through its Australian supply chain.