About five years ago, I decided to make a wall display to show off all the magazines I had published.

But I soon ran out of space and decided I needed to expand the display to accomodate all the magazines I published after it filled up.

It only took me four years to get around to it!

But – in the fours years I’ve been procrastinating about the display expansion, I’ve already published enough magazines to fill all the space I gained in the additions.

And here’s a little secret for you – when I set out on this publishing journey, 55 magazines was my personal target – to beat the number of ARMY Magazines that Army Newspaper Unit published before they shut it down [see here why they shut ARMY Mag down – and why I started CONTACT].

BTW – you can still buy copies of all our printed magazines here.

Make-n-Do is the CONTACT Editor’s personal ‘playlist’ on the CONTACT YouTube Channel, where the philosophy is making do with the tools and materiel I have and making and doing as an escape from the computer (though, ironically, the video making then ties me to the computer for almost as many hours as I spent Make-n-Do in the shed 😉 ) 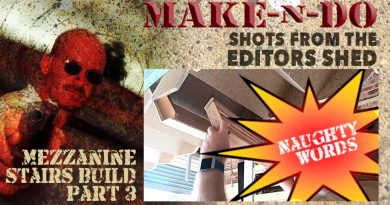