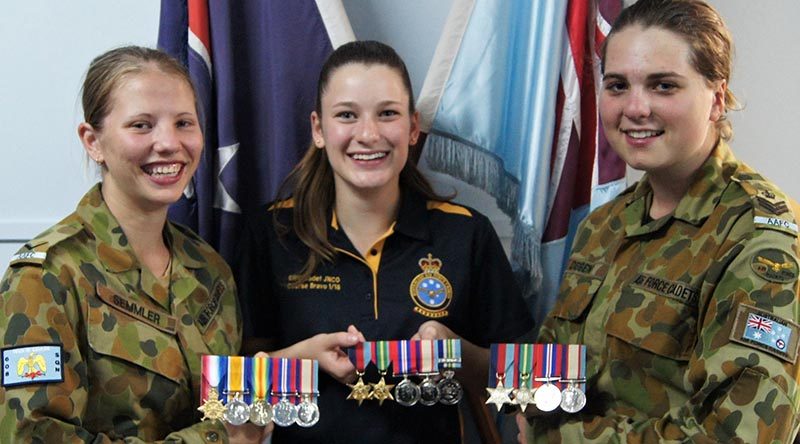 Australian Air Force Cadets throughout South Australia and Mildura are currently preparing for their involvement in a number of Anzac commemorative activities.

CAPTION: LCDT Courtney Semmler, CCPL Lucy Tassell and CFSGT Casey Dibben of No 6 Wing, AAFC, will honour the military service of their forebears during this year’s Anzac commemoration period, by wearing their medals.

They are busy confirming that their Service Dress uniforms fit properly and their Hat Fur Felt brims are flat – and some are even making sure their medals are ready for wear.

Cadets wearing medals? Yes, cadets may wear on their Service Dress uniform (on the right breast) the medals of a deceased relative, passed down in a direct line from grandparents to parents.

Cadets may not wear the medals of a relative who is still living, and medals may not be worn by members of Catafalque Parties.

Cadet Flight Sergeant Casey Dibben will wear the medals of her maternal great-grandfather Private Geoffrey Whiteman (1922-1985) from Williamstown, SA. She will honour his service during World War Two with the 18th Garrison Battalion and then in New Guinea with the 6th Australian Division Workshops AIF (Australian Electrical & Mechanical Engineers).

Cadet Corporal Lucy Tassell will honour the service of her great-grandfather Owen Forrest (1924-2015) during and immediately after World War Two, with the Australian Military Forces (Militia) and then as a Leading Aircraftman with the RAAF in the South West Pacific Area.

Leading Cadet Courtney Semmler will pay tribute to her great-great-grandfather Francis Wotzko (1884-1951), who served in both World Wars.

Frank Wotzko was aged 30 when he enlisted in the Australian Imperial Force on 23 November 1914, serving with the 3rd Light Horse Regiment AIF (dismounted) at Gallipoli.

Surprisingly perhaps, Frank Wotzko volunteered again in 1939 – as a 55 year old – and served with the 4th Garrison Battalion early in the war, guarding Adelaide’s vital assets including the cable station at Grange, the radio mast at Rosewater and various ammunition depots.

Flying Officer (AAFC) Paul Rosenzweig, 6 Wing’s Public Affairs & Communication Officer, said, “Participating in commemorative events gives cadets the opportunity to reflect on the military service of their ancestors, bridging the generations and laying a foundation of honour and respect which will follow them through their life and career”. 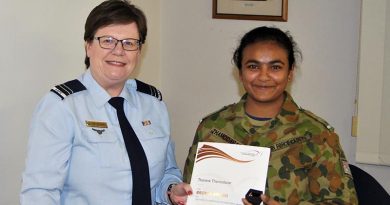 Awards and promotions in 6 Wing AAFC

One thought on “PREPARE FOR ANZAC DAY – Part 1: Wearing a relative’s medals”