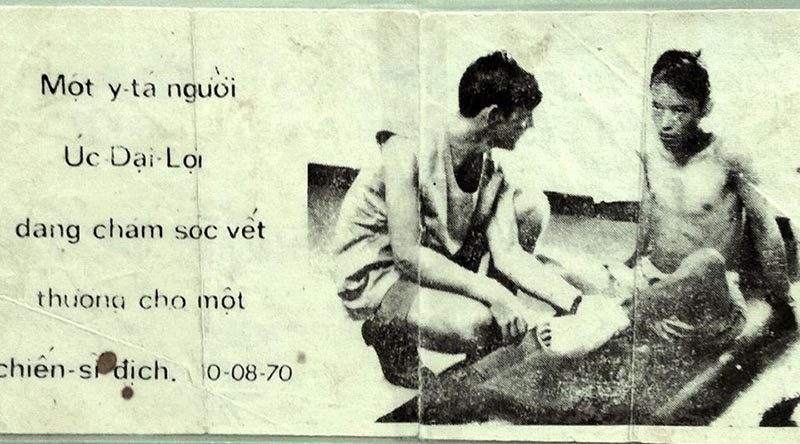 You know the digger’s lament don’t you?

“Why the fuck do we get all the shit jobs?”

I’ve written a fair bit about Davo, but who is this Barry character?

Well, in a sentence, he was everything Davo was not.  He was of slight build (oops! I nearly said how intelligent he was, but that might upset Davo if he reads this).  He didn’t smoke, I never saw him drunk and I don’t think he swore all that much either.  Like Davo, Barry was on his second tour of Vietnam as an Infantry soldier; he knew his shit.  I never saw him panic.  Barry was well respected by his blokes in 4 Section and by the rest of us.  I’ve seen Barry from time to time over the years.  He always has a smile on his face and a positive outlook on life; and he is a humble man.  You will never hear him say how he was awarded an MID or about the award for gallantry he received from the South Vietnamese Government; but as usual I am getting ahead of myself.

There was an initiative to encourage the enemy to surrender.  Leaflets were dropped throughout the jungle advising the enemy to give themselves up saying they would be well looked after.  There was even a safe conduct pass that was yellow in colour and should the VC hold this up and surrender they would be well cared for.  We of course knew all about this program but I dunno how successful it was.  It was called the Chieu Hoi Program (pronounced chew hoy) and 2 Platoon was asked to escort a guy who had surrendered under this program back to his mates in the jungle so we could kill them, or something like that.

The enemy camp was out near the Nui Dinhs, so off we go to sort these guys out.  With us was the Tracker Team from Support Coy.  The Tracker Teams use Labrador dogs to follow up the enemy, either by their scent or by following blood trails.  I knew all about these teams.  As a matter of fact I tried to get into the Tracker Team and I enquired about them when I first went to Townsville with 2RAR.  I was told that because I was a Nasho I had no chance.  You can imagine my surprise when I spoke to the dog handler about it and he said he was a Nasho.

Lemme set the scene for you.  While the rest of Alpha Coy is back at The Dat getting on the piss each night, we are battling our way through the jungle with the heat and humidity, mosquitoes, ants and leeches with this kid that looks about 12 years of age.  They gave him a pack, one of the old pattern 37 canvas ones and, while it looked tiny on our backs when we used them in Australia, somehow it looked just right on this guy who was lucky to be 5 feet tall.

We didn’t have an interpreter.  They either cost too much money or they were too scared to come out with us or maybe 2 Platoon has a reputation for being a bunch of animals.  I looked around at the blokes – yep, most of them were bloody ugly – but animals?  I dunno.  We haven’t fired a shot in anger yet.  We’ve captured an enemy officer who supplied plenty of intelligence; and we don’t shave in the bush unless the Red Rat is around.

“Which direction did you come from?”

“Where is your camp?”

“Take us to your leader.”

Nigel nodded in response to each question with a smile on his face; then he waved his arm and motioned in a certain direction.  We took that to mean his mates and their camp wasthataway,  towards the Nui Dinhs, so off we went.  Anyway it was hard for him to speak as his mouth was full of food.  Every few hundred yards Davo would look back at Nigel who would nod, wave his hand and reach for another can of food.

I had an uneasy feeling about this guy.  I mean if the roles were reversed would I lead the enemy back to an Australian camp in the bush.  Well I let my mind wander, maybe if the Red Rat was there…

Halfway through the second day we were all getting a little bit tense.  Not because we sensed the enemy about, but rather what in the hell was this Nigel guy up to apart from eating?  We were all reaching the same conclusion;  it was a waste of time.

That’s when the Barry and Davo show started.

Davo stated to get a little bit short with this guy, you know, raising his voice, waving his arms about and getting so worked up that he was dribbling spit from his mouth.  Nigel was nonplussed and opened another can of food, it looked like Ham and Lima Beans, and he started shovelling it into his mouth.

Davo had had enough.  “I’m sick of this shit,” he said in a spray of spittle.  He picked up his rifle and made a bee line for Nigel who was watching him over the rim of the Ham and Lima Beans can that was now nearing empty.  “This bastard is dickin’ us around, he’s never going to take us to the enemy camp.  I’m going to shoot the little bastard!”

Enter Barry from stage right, “No Davo, don’t, don’t do it!”

“You prick, where is the camp?” asked Davo who was now only a couple of feet from Nigel with his M16 pointing towards him, his finger outside of the trigger guard.  Davo was shaking the rifle and trying to look menacing.  Nigel dropped the can of Ham and Lima Beans, I could see it was empty.  By now a few of us were watching the spectacle, trying not to laugh.  What would Nigel do next?

“I reckon he’ll have a tin of fruit,” said Wooly a man of wit who had the M79 resting across his lap.  The M79?  Davo should shove that in his face.

Before Nigel had a chance to check his pack, Davo lunged.  Barry ran between them, grasped Davo’s rifle, raising it away from Nigel’s face.

Davo gave Barry a wink, “I’m going to shoot this bastard if he doesn’t tell us which way the camp is!” as he struggled with Barry’s grasp.

Barry moved Davo back and sat him down near his pack.  He turned around, walked over to Nigel, squatted down in front of him and said in a nice low, friendly voice, “Davo’s as mad as a cut snake mate, you’d better cooperate with us or who knows what he’s likely to do.  You don’t need to upset him anymore.  Now which way is it to the camp?” Barry gestured with open arms and suggested a possible way to go by pointing one way and then another.

Nigel, who hadn’t eaten anything for maybe two minutes, pointed in the direction we had been travelling while saying something in Vietnamese.

Into the third day we went.

To go on seemed futile and besides the tracker dog can only stay in the field for so long.

We went back to The Dat.

I dunno what happened to Nigel, maybe he runs a restaurant in Saigon now. 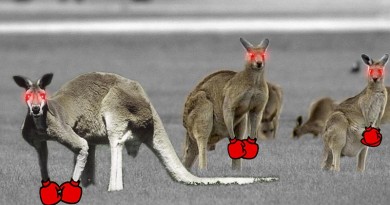 3 thoughts on “Chapter 32: The Barry and Davo Show”