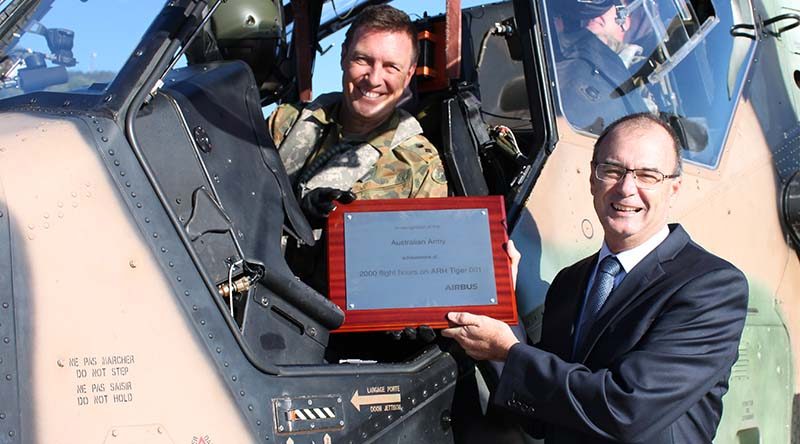 A38-001 under the command of Lieutenant Colonel Dave Lynch reached the 2000-hour milestone recently on a flight from the Army Aviation Training Centre, Oakey, to Gallipoli Barracks Enoggera.

A38-001 was the first of two ARH Tigers delivered to the Australian Army in December 2004 – on a memorable parade escorted by two Light Horsemen.

It is also the only aircraft in the Australian fleet fitted with specialist flight test instrumentation, which enables data collection for aircraft and fleet management in Australian conditions, and for the weapons performance and flight envelopes.

This is not the first ‘first’ for A38-001, however. The rich history of flight trials both in France and in Australia on 001 includes the initial acceptance flight trials in 2004, the first 70mm rocket firings on the Cazaux test range in France in 2004, the first Hellfire missile firings from a Tiger on the Woomera test range in Australia, the first Advanced Precision Kill Weapon System Laser Guided rocket firings from a Tiger on the Woomera range in 2016 and the first Australian embarked Tiger ship trials on HMAS Canberra LHD in 2017.

Lieutenant Colonel Dave Lynch is the Commanding Officer of the School of Army Aviation at Oakey where Army and Airbus qualified flying instructors work together in a close partnering arrangement to deliver some of the most highly skilled pilots in the Australian Defence Force to the 1st Aviation Regiment in Darwin.

The five ARH Tigers at Oakey, including ARH 001, are maintained by Airbus Group Australia Pacific.

Lieutenant Colonel Lynch said Tiger was a potent weapon system that ADF had worked hard to mature to a point where it delivers required effects on time and on target.

“The aircraft itself has best-in-class agility and manoeuvrability, which enhances our ability to employ the precise weapon effects to fight and win in either the land or amphibious environment,” Lieutenant Colonel Lynch said.

“This agility also makes it an absolute dream to fly, as it has crisp control response and truly carefree handling characteristics, enabling greater focus on the mission.”

Tony Fraser, Managing Director Airbus Group Australia Pacific, was on hand to witness the Tiger’s arrival at Enoggera after the milestone flight.

He said, “on behalf of all the Airbus employees here and in Europe involved in the development, manufacture, assembly and support of Tiger, we congratulate Army on this significant achievement”.

“To Lieutenant Colonel Lynch, fortunate enough to fly this terrific machine, and all those in the full Army Aviation capability, we are very proud of our contribution to the security, sensor and lethal operational effects that you bring to your soldiers through the ARH Tiger.”

The Australian Army ordered 22 ARH Tigers from Airbus, the last of which was delivered in 2011.

The aircraft fleet achieved Final Operating Capability (without fanfare) in April 2016 – and will be retired early, in less than 10 years from now. 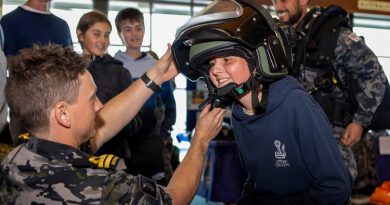 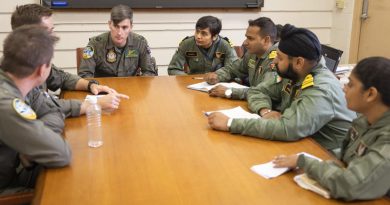