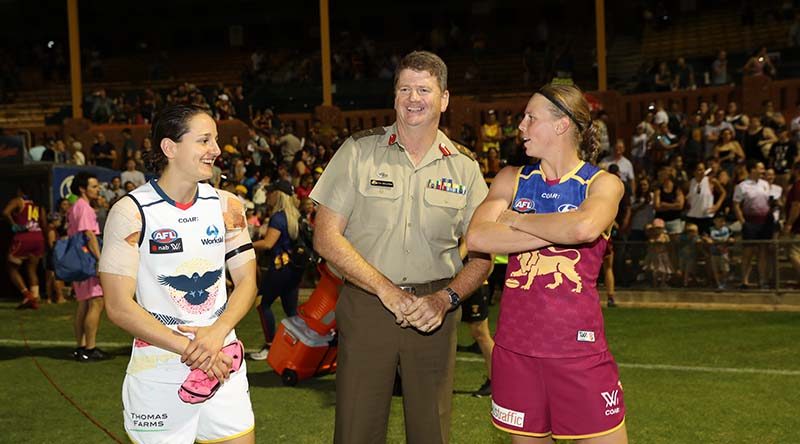 NEWS UPDATE: The Adelaide Crows created history on 25 March 2017, becoming the first AFLW Premiers, beating the Brisbane Lions by six points. The Crows fought off a late challenge to beat the previously unbeaten favourites in a tense inaugural-season Grand Final.

Three of the four Australian Defence Force members selected to play in AFL national women’s competition will play in the first ever AFL Women’s league grand final tomorrow – with one soldier on each team.

CAPTION: Major General Gus McLachlan meets AFLW players Private Heather Anderson from the Adelaide Crows and Private Kate Lutkins from the Brisbane Lions after their 2017 AFLW Round 5 match on 4 March in Adelaide. Both soldiers will face each other again tomorrow in the Grand Final on the Gold Coast. Royal Australian Navy’s Leading Seaman Rhiannon Metcalfe also plays for the Crows. Photo by AFL Media.

Australian Army AFL Patron, and Commander of Army’s Forces Command, Major General Gus McLachlan, said he was thrilled the women had made the first ever AFL Women’s league grand final, and he’ll be cheering on the players from the sidelines.

“I had the honour of attending the Adelaide Crows v Brisbane Lions match in Adelaide a few weeks ago, and it really was a thrill to watch these players who have reached the pinnacle of elite competition,” Major General McLachlan said.

“We are so proud of these Australian Defence Force women, who have made the grand final in the first year of the women’s AFL competition – it will be impossible to pick a side to barrack for,” he said.

The Lions and Crows last met in a top-of-the-ladder clash in round five, with Brisbane running out three-point winners in what some called one of the games of the season.

The Grand Final will be played at Metricon Stadium on the Gold Coast, Queensland, tomorrow, 25 March. We think it will be broadcast live on Channel 7 nationally at 2 pm – but every other source says it starts at 12.55.

The game will be replayed on Fox at 11pm. 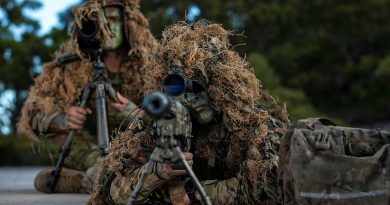 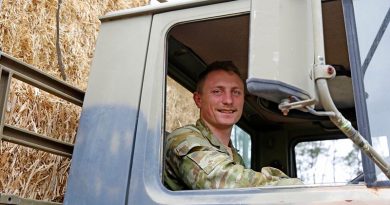 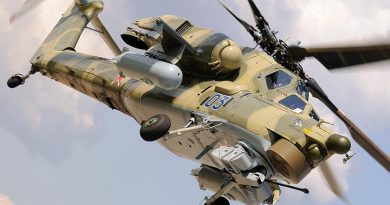