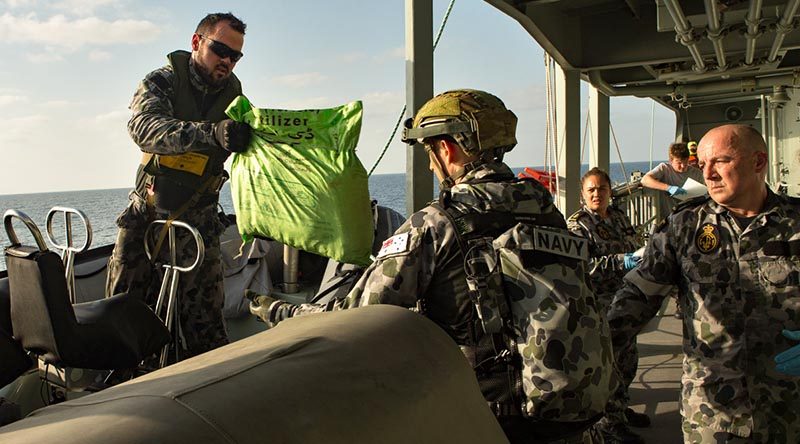 Royal Australian Navy ship HMAS Arunta has seized more than 800kg of hashish hidden in a consignment of coffee.

Under the authority of joint Canadian-Australian Combined Task Force 150 (CTF-150), HMAS Arunta seized the drugs in the Arabian Sea in the ship’s first successful intercept since starting counter terrorism operations in December 2016.

“There were numerous suspicious elements regarding this vessel and subsequently we conducted a thorough search,” Commander Steil said.

The drugs have an estimated street value of approximately $36 million according to Australian Crime Commission figures.

“Narcotic smuggling is well known in this area with the smugglers always trying to find new ways to hide cargo, but our boarding parties’ training, techniques and equipment are of the highest standard,” Commander Steil said.

“Our combined efforts under CTF-150 improve the overall maritime security, stability and prosperity in the region by denying terrorist organisations their ability to move personnel, weapons or narcotics and obstructing their capacity to raise funds.”

Commander Joint Task Force 633 Major General John Frewen said the successful drug interception was the culmination of significant work the ship has undertaken as part of the Combined Maritime Forces.

“Arunta has already gained a reputation as being professional and meticulous in its pursuit of contraband items,” Major General Frewen said.

“The fishing vessel was intercepted in international waters under the direction of the Canadian-led CTF 150 headquarters, which also includes Australian personnel deployed to Operation MANITOU.”

HMAS Arunta is on her third deployment to the Middle East Region, as part of Joint Task Force 633 and it is the 64th rotation of a Royal Australian Navy vessel in the region since the first Gulf War in 1990.

Operation MANITOU is the ADF contribution to support international efforts to promote maritime security, stability and prosperity in the Middle East Region.

The primary goal of Operation MANITOU is to contribute to the US-led Combined Maritime Forces, which is a 31-nation partnership focused on defeating terrorism, preventing piracy, encouraging regional cooperation and promoting a safe maritime environment. 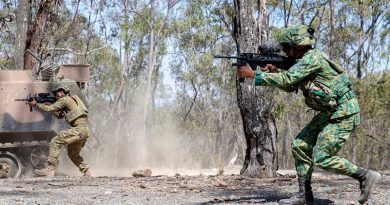