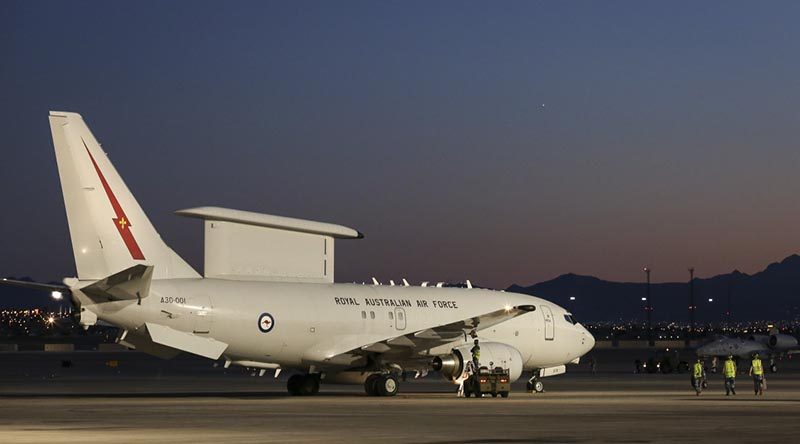 A 200-strong contingent of Royal Australian Air Force personnel deployed to Nellis Air Force Base in Nevada with colleagues from the United States and United Kingdom.

The training operates within the 31,000-square-kilometre Nevada Test and Training Range, which is turned into a simulation of a high-end-threat battlespace.

RAAF deployed a range of capabilities during Exercise Red Flag 17-1, from a combat control team that parachuted in freezing conditions (see YouTube video here) to a dry lake bed for an airfield survey; to air battlespace managers who controlled movements and datalinks for more than 70 friendly and ‘enemy’ aircraft.

“By coming here, we’re preparing for high-end war fighting, so we can deploy at short-notice on operations, and have confidence that we are going to be successful,” Group Captain Bellingham said.

The first Exercise Red Flag was held in November 1975, borne out of the USAF’s analysis of the Vietnam War, which found an aircrew’s chances of survival increased if they had flown at least 10 combat missions.

Those 10 missions are now conducted in a modern and simulated high-threat environment at Red Flag, with the most recent exercise seeing an increase in the capability of ‘enemy’ surface-to-air missiles and aggressor fighter aircraft in the training range.

This provides greater training challenges for the increased number of advanced fifth generation fighter aircraft participating in the exercise, such as USAF’s F-22A Raptor and F-35A Lightning II.

“It is gruelling and rigorous, but all of our personnel have a fantastic time and get great value out of the exercise,” Group Captain Bellingham said.

“We’ll take information and training back and feed it into our force preparation, and will translate into our current operations.”

For the Australian contingent, the participation of USAF-operated F-35As – as well as the United States Navy’s E/A-18G Growler electronic attack jet – provided exposure to capabilities that will soon enter RAAF service.

“We are integrated with these capabilities from start to finish, from planning missions, through to debriefing the missions,” Group Captain Bellingham said.

“Australia has Air Battlespace Managers from No. 2 Squadron and No. 41 Wing who are controlling the Red Flag airspace, and getting firsthand experience how these capabilities can be employed.

“We’re getting real insight into understanding the capabilities and what Australia’s future is going to look like.”

The CAOC is responsible for planning the Red Flag missions and ensuring they’re coordinated with space and cyber-based efforts, which can be contested by an aggressing force.

“Our coalition allies have been extremely engaging and supportive of our involvement in the exercise.

“In my 30 years of the Air Force, this is one of the highlights.

“Being at the exercise is as realistic as it gets.”

$111million sustainment contract for missiles we haven’t got yet